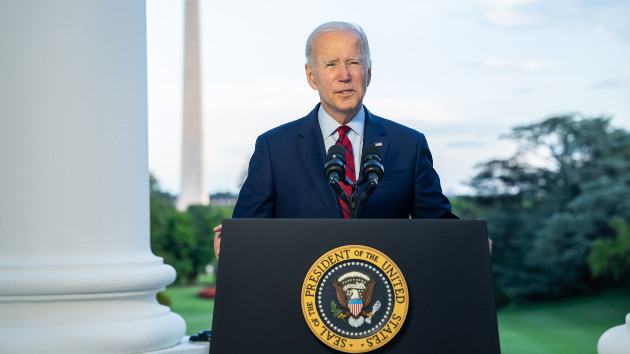 (WASHINGTON) — President Joe Biden, little more than a week away from Election Day, presented something of an ultimatum to gas and oil companies: ramp up production or pay a higher tax rate.

“It’s time for these companies to stop war profiteering, meet their responsibilities to this country, give the American people a break and still do very well,” Biden said as he spoke from the White House on Monday afternoon alongside Treasury Secretary Janet Yellen and Energy Secretary Jennifer Granholm.

Biden threatened imposing a higher tax on excess profits and other restrictions if companies don’t increase production and refining capacity to drive down prices at the pump.

“My team will work with Congress to look at these options that are available to us and others,” he said.

Congress is currently in recess as lawmakers return home to campaign and stump for their preferred candidates ahead of the Nov. 8 elections.

Oil companies have made staggering profits while Americans are paying higher energy prices.

“What I mean is profits so high it’s hard to believe,” Biden said, accusing companies of passing the profits back to shareholders and buying back their stock.

“Give me a break, enough is enough,” Biden added.

As of Monday, the national average for a gallon of gas was $3.76, according to the American Automobile Association. That’s 30 cents higher than the price of gas a year ago.

If oil companies passed on their excess profits to consumers, Biden said the price of gas would go down by 50 cents.

Higher energy prices also impact manufacturers, and those costs are often passed down to consumers by raising prices on food, clothing, furniture and more. Inflation is at a level not seen in decades, with the consumer price index rising 0.4% in September and consumer prices overall rising 8.2% in the last 12 months.

Nearly half of Americans say either the economy (26%) or inflation (23%) is the most important issue this midterm cycle, according to a new poll conducted by ABC News and Ipsos.

Republicans have seized on high prices in their midterm messaging, blaming inflation on Democratic policies and spending packages. The ABC News/Ipsos poll found nearly three out of four Republicans point to the two economic concerns as a priority.