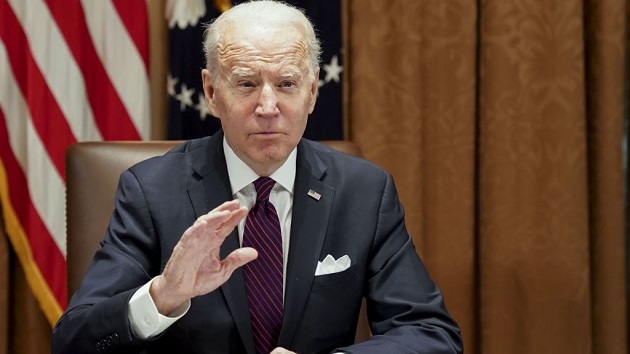 (WASHINGTON) — President Joe Biden on Thursday sought to clean up his comments on Ukraine made during his marathon news conference Wednesday, making it “absolutely clear” that any Russian move into Ukraine would be seen as an “invasion.”

“I’ve been absolutely clear with President Putin. He has no misunderstanding. If any, any, assembled Russian units move across the Ukrainian border, that is an invasion. But — and it will be met with severe and coordinated economic response that I’ve discussed in detail with our allies, as well as laid out very clearly for President Putin,” he told reporters.

“Let there be no doubt at all: If Putin makes this choice, Russia will pay a heavy price,” Biden added.

The clarification comes after he seemed to throw into question how the U.S. and NATO would respond if Russia did take action against Ukraine — in the case of what he called a “minor incursion.”

“It’s one thing if it’s a minor incursion and then we end up having a fight about what to do and not do, et cetera,” Biden said Wednesday.

“But if they actually do what they’re capable of doing with the force they’ve massed on the border, it is going to be a disaster for Russia if they further invade Ukraine.”

Wednesday evening, shortly after his news conference, White House press secretary issued a statement attempting to clarify Biden’s suggestion the NATO alliance might be divided, saying, in part, “If any Russian military forces move across the Ukrainian border, that’s a renewed invasion, and it will be met with a swift, severe, and united response from the United States and our Allies.”

Secretary of State Antony Blinken, in Berlin meeting with Germany’s Chancellor Scholtz ahead of his talks Friday with Russian Foreign Minister Sergei Lavrov, said, “We have been very clear throughout — if any Russian military forces move across the Ukrainian border and commit new acts of aggression against Ukraine, that will be met with a swift, severe, united response from the United States and our allies and partners.”

“We will interpret any violation of Ukraine’s sovereignty and territorial integrity by Russia and Vladimir Putin as an aggressive action, and it will be met with costs, severe and certain,” Harris told ABC’s George Stephanopoulos on “Good Morning America.”

Biden’s initial comments were quickly met with criticism from Republican lawmakers, including Sen. Rob Portman, who was part of a congressional delegation that traveled to Ukraine earlier this week. Portman tweeted he was “deeply troubled” by Biden’s remarks, adding “any Russian military incursion into Ukraine should be viewed as a major one that could likely destabilize Ukraine and Europe.”

Senate Minority Leader Mitch McConnell was also critical, saying Biden’s news conference was “a bizarre and devastating performance, especially — I would add — for our friends on the front lines.”

Ukrainian President Volodymyr Zelenskyy seemed to issue his own rebuke of Biden’s comments in a pointed tweet Thursday morning.