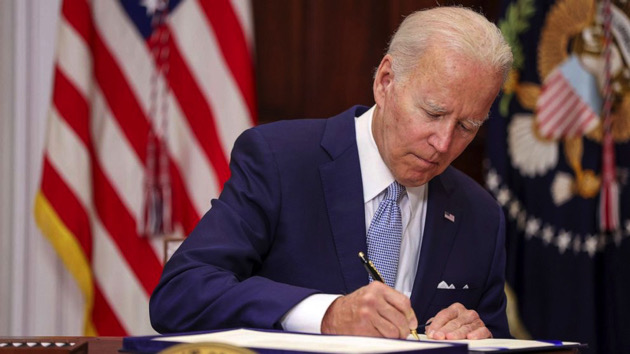 Biden signed the Bipartisan Safer Communities Act into law last month, but the signing was somewhat overshadowed, coming one day after the Supreme Court released its decision to overturn Roe v. Wade. Monday provides the president a new opportunity to take a victory lap — but it comes one week after another mass shooting at a July Fourth parade in Highland Park, Illinois, left seven dead and dozens wounded.

“I recently signed the first major bipartisan gun reform legislation in almost 30 years into law, which includes actions that will save lives,” Biden said in the Roosevelt Room addressing the latest mass shooting. “But there is much more work to do, and I’m not going to give up fighting the epidemic of gun violence.”

Gun violence survivors and family members of victims of recent mass shootings in Uvalde, Texas, and Buffalo, New York, are expected to attend, as well as survivors and family members from the Columbine, Sandy Hook and Parkland mass shootings, among others. But while many in attendance are expected to praise the legislation, some gun safety advocates lament that it doesn’t go far enough.

Ahead of Monday’s event, Biden asked Americans in a tweet to text him their stories of how gun violence has impacted their communities, looking to tout how the new law will help stop similar violence.

The Bipartisan Safer Communities Act includes $13 billion in new spending for mental health programs and for securing schools. It also makes background checks stricter for gun buyers under 21, helps to close the so-called boyfriend loophole to restrict domestic violence offenders from purchasing guns, and incentivizes red flag laws to remove firearms from people deemed to be a danger to themselves or others.

But it doesn’t go as far as many wanted, including Biden, lacking measures such as universal background checks and a ban on assault weapons and high-capacity magazines.

As the president marks progress on gun reform Monday, he will also call on Congress to act further.

Biden is expected to urge Congress to confirm Steve Dettelbach to serve as director of the Bureau of Alcohol, Tobacco, Firearms and Explosives.

He will also call on Congress to bring him “legislation that would ban assault weapons and high capacity magazines, strengthen background checks, and enact safe storage laws,” according to the White House.

The president’s call for more congressional action comes as the Senate returns from its July Fourth recess Monday. Notably, Senate Majority Leader Chuck Schumer will not be at Biden’s event, as he is isolated with COVID-19.

Schumer’s positive test serves as a reminder that COVID is still a looming threat, though the close spacing of chairs on the White House South Lawn Monday doesn’t appear to reflect that concern.