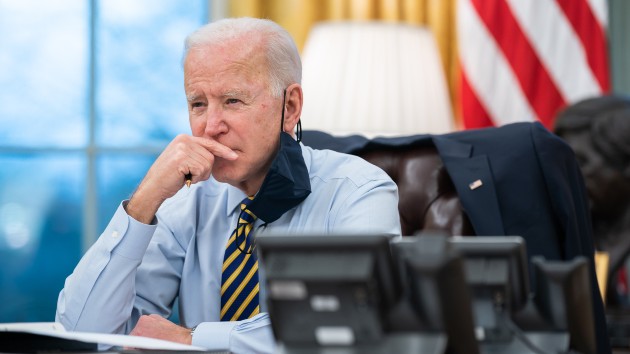 The two met in the Oval Office for just over an hour Wednesday afternoon to talk about the $928 billion GOP infrastructure proposal unveiled last week, but announced no major breakthroughs on how they plan to bridge their still substantive differences.

Kelley Moore, a spokeswoman for Capito, said the senator — who is leading negotiations on infrastructure — intends to connect with other Republicans working on the package before resuming talks with the administration.

In a statement following the meeting, Moore said the senator is still hopeful for a bipartisan outcome.

“Senator Capito reiterated to the president her desire to work together to reach an infrastructure agreement that can pass Congress in a bipartisan way,” according to the statement. “She also stressed the progress that the Senate has already made. Senator Capito is encouraged that negotiations have continued.”

The White House has for weeks said they wanted to see progress on a bipartisan infrastructure package by Memorial Day, but with the holiday now passed, they’ve kicked the ball down the road a bit. Transportation Secretary Pete Buttigieg told ABC’s This Week co-anchor Martha Raddatz that he needs to see movement on a deal by the time the Senate returns from its holiday recess.

“As the president so often says, inaction is not an option, and we really are facing some serious time pressure as we look to that week following this week when Congress is going to be back in D.C,” Buttigieg said.

The Republican offer has nearly doubled since Capito unveiled their initial $568 billion framework in April, but it still leaves the Republicans hundreds of billions of dollars short of Biden’s most recent $1.7 trillion pitch.

And while the GOP offer is higher now than ever, their overall figure takes into account billions already approved in a water infrastructure bill earlier this year and considers a not-yet-passed bipartisan highway spending reauthorization worth over $300 billion as the “anchor” of their package. In total, the GOP offer proposes about $250 billion in new spending, while the administration has proposed that its entire $1.7 trillion package be funded with new money.

Negotiators have also sparred for weeks over how to fund the massive package. Republicans have refused tax hikes on corporations, which they said is a referendum on the 2017 tax bill. And Democrats have refused to consider using user fees, such as tolls or a gas tax, to pay for the package.

But the administration has said there may not be as sizable a pot of money available to repurpose as Republicans suggest. They’ve also said they may not be comfortable repurposing funds from the $2.2 trillion COVID-19 relief bill.

“We are concerned that the proposal on how to pay for the plan remains unclear: we are worried that major cuts in COVID relief funds could imperil pending aid to small businesses, restaurants and rural hospitals using this money to get back on their feet after the crush of the pandemic,” White House press secretary Jen Psaki said last week.

Publicly, most Republicans are still backing a bipartisan path forward. Minority Leader Mitch McConnell said at a press conference in Kentucky on Wednesday that he is “hoping for the best that we can actually reach a bipartisan agreement on infrastructure.”

But the fact remains that there are still major differences between the administration and Senate Republicans on how infrastructure even ought to be defined.

Republicans have argued that things like child care, home care, work training and other “human infrastructure” elements of the White House package have no place in an infrastructure bill.

Buttigieg told Raddatz on Sunday he still has a “lot of concerns” about items that Republicans have stripped from their counteroffer.

Increasingly it seems that if the White House wants to strike a deal they’ll need to split their package in two, keeping core infrastructure priorities on one bill that could pass the Senate through regular order with GOP backing and then offering a second bill to pass the more controversial “human infrastructure” priorities down party lines.

To do this, Democrats would need to use a procedural tool called reconciliation which allows the Senate to bypass the usual 60-vote threshold necessary to pass legislation.

Splitting the infrastructure bill in two could score Biden a bipartisan win, and Sen. Roy Blunt, R-Mo., said Thursday that the president conveyed to Republicans his intention to do as much.

“The president was very upfront in our meeting with him, you know, if we divide this up he said, ‘I’ll try to get the rest of it some other way’ and we totally understand that,” Blunt said. “As a matter of fact, we don’t mind debating things in the other bill and seeing if that’s what the American people want to do, but let’s not do it under the guise of infrastructure.”

But using reconciliation will require the support of all 50 Democrats in the Senate and right now, at least two Democrats, Sens. Joe Manchin and Kyrsten Sinema, oppose using the procedural work around.

Biden seemed to express his growing frustration on Tuesday, without naming names, though he was speaking about a separate voting rights bill.

“I hear all the folks on TV saying, ‘Why doesn’t Biden get this done?’ Well, Biden only has a majority, effectively, of four votes in the House and a tie in the Senate, with two members of the Senate who vote more with my Republican friends,” Biden said. “But we’re not giving up.”

Psaki defended Biden’s remarks on Wednesday, telling reporters that Biden was commenting on the media coverage of these members, not the members themselves.

While negotiations on a larger package are ongoing, committees in both the House and Senate are working their way through the surface transportation reauthorization bill that Capito describes as the “anchor” of her package.

The Senate committee managing the bill passed it unanimously out of committee last week. The House is expected to take up similar legislation in committee soon.