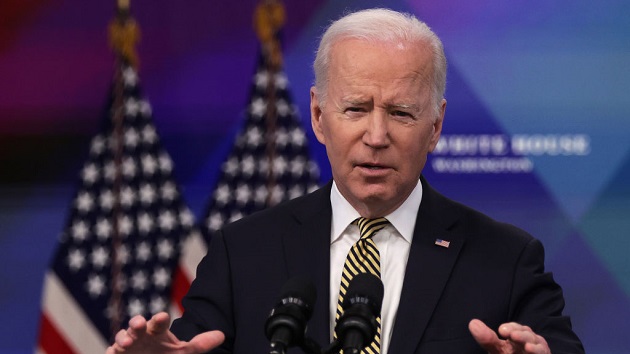 The president initially told a reporter “no,” when asked if he was ready to label Putin a war criminal, but moments later Biden circled back, asking her to repeat the question which he appeared to have initially misunderstood.

“I think he is a war criminal,” Biden said.

A short time later, White House press secretary Jen Psaki said Biden was speaking “from the heart” at an afternoon press briefing after he made the comment, while carefully noting there is still a State Department review of whether it considers Russia’s attacks on Ukrainian civilians a war crime.

Despite the evidence, the White House until now had gone out of its way not to label Putin a war criminal, repeatedly noting there was an official review underway before they could formally accuse Putin of war crimes.

Earlier this month, Biden said it was “clear” Russian forces were targeting civilian areas but said that it was too early to call them war crimes.

“Do you believe Russia is committing war crimes in Ukraine?” Biden was asked on March 2.

“We are following it very closely. It’s early to say that,” he said.

The shift in characterization follows a wave of U.S. sanctions on Russia including personal sanctions on Putin and following a powerful appeal from Ukrainian President Zelenskyy to Congress, in which he called on Biden to do more to aid Ukraine.

One year ago to the day that Russia forces began invading Ukraine, Biden told ABC News Anchor George Stephanopoulos in an interview that be believed Putin was a “killer.”

How Natural Disasters Can Change A Politician