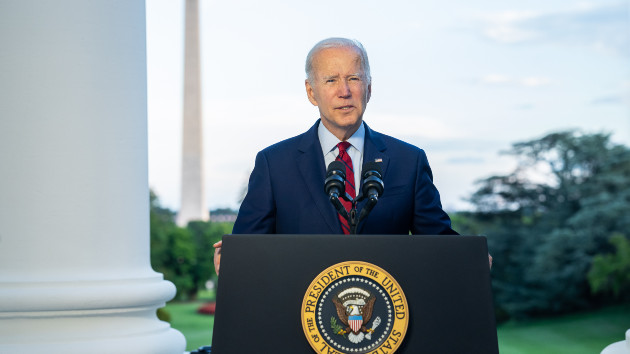 (WASHINGTON) — President Joe Biden said he does not believe that Russian President Vladimir Putin would use a tactical nuclear weapon on Ukraine.

“I think it’s irresponsible for him to talk about it, the idea that a world leader of one of the largest nuclear powers in the world says he may use a tactical nuclear weapon in Ukraine,” Biden told CNN’s Jake Tapper in an exclusive interview with the network.

“The whole point I was making was it could lead to just a horrible outcome. And not because anybody intends to turn it into a world war or anything, but just once you use a nuclear weapon, the mistakes that can be made, the miscalculations, who knows what would happen,” Biden continued.

When asked if the United States had considered what would happen if Putin did use a nuclear weapon and what the “red line” for his administration would be, Biden said it would be irresponsible of him to discuss specifics but made it clear that the Pentagon did not have to be asked to game out potential outcomes.

“He, in fact, cannot continue with impunity to talk about the use of a tactical nuclear weapon as if that’s a rational thing to do. The mistakes get made. And the miscalculation could occur, no one can be sure what would happen and could end in Armageddon,” Biden added later on in CNN’s interview.

Following a large explosion on the Kirch Strait Bridge last Saturday, Russia, who has blamed Ukraine for the attack, has retaliated with a wave of powerful attacks across Ukraine with missile strikes on Kyiv and around the nation, killing at least 19 and injuring hundreds more.

Biden said he has “no intention” of meeting with Putin at the G20 taking place next month in Indonesia.

But he did include a caveat with that statement.

“If he came to me at the G20 and wanted to talk about the release of Griner, I’d meet with him,” said Biden. “We’ve taken a position. I just did a G-7 meeting this morning … I’m not about to, nor is anyone else prepared to, negotiate with Russia about them staying in Ukraine, keeping any part of Ukraine.”