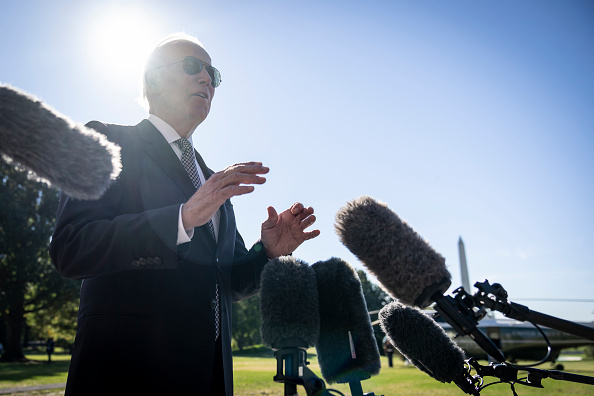 (WASHINGTON) — President Joe Biden on Thursday announced he’s pardoning all Americans who’ve been convicted of simple marijuana possession under federal law, coming closer to keeping a 2020 campaign promise to try to get the drug decriminalized a little more than a month before the midterm election.

The executive action will benefit 6,500 people with federal convictions from 1992 to 2021 and thousands of others charged under the District of Columbia’s criminal code, according to senior administration officials. Elaborating on the number of people affected, officials said “there are no individuals currently in federal prison solely for simple possession of marijuana.”

“As I said when I ran for president, no one should be in jail just for using or possessing marijuana,” Biden tweeted in an unusual video statement. “It’s legal in many states, and criminal records for marijuana possession have led to needless barriers to employment, housing, and educational opportunities. And that’s before you address the racial disparities around who suffers the consequences. While white and Black and brown people use marijuana at similar rates, Black and brown people are arrested, prosecuted, and convicted at disproportionate rates.”

His action before the consequential midterm elections, in which Democrats are vying to maintain control of the House and Senate, could be viewed as a move to energize voters, particularly younger voters.

When asked about the timing of the executive action, administration officials only said that Biden’s been “clear that our marijuana laws are not working.”

Biden said Thursday he’s urging governors to do the same for individuals with state convictions, which administration officials said account for the vast majority of possession-related convictions.

He’s also requesting Health and Human Services Secretary Xavier Becerra and Attorney General Merrick Garland expeditiously review how marijuana is scheduled under federal law. Currently, marijuana is classified as a “Schedule 1” drug — along with LSD, ecstasy and heroin — under the Controlled Substances Act, which Biden said Thursday “makes no sense.”

“Too many lives have been upended because of our failed approach to marijuana. It’s time that we right these wrongs,” Biden added.

Biden’s faced pressure from his own party this year to take more decisive action, as recent elections have shown Americans’ views on legalization have changed.

In the 2020 cycle alone, four states approved ballot measures to legalize the sale and possession of cannabis for adult use. An analysis from FiveThirtyEight found a majority of registered voters in all 50 states favor making marijuana legal.

This past summer, a group of lawmakers including Sens. Elizabeth Warren, D-Mass., and Bernie Sanders, I-Vt., wrote a letter to Biden, Garland and Becerra urging them to deschedule cannabis and issue pardons to all individuals convicted of nonviolent cannabis-related offenses.

Biden, while slower to embrace marijuana reform than many of his Democratic colleagues, pledged on the 2020 campaign trail to decriminalize cannabis use and expunge prior convictions.

Senate Democrats this year also finally released their long-awaited marijuana legalization proposal, which would lift the federal prohibition and allow states to determine how they want to regulate marijuana. But the legislation faces an uphill battle in the 50-50 chamber, where 10 Republicans would need to support it, and Senate leadership has yet to announce when the bill will be brought up for a vote.

“Members of Congress have been working on this issue,” Biden administration officials said Thursday. “But that effort has stalled and we’re almost at the end of the Congress. So the president has been considering his options and he’s now taking executive action to address the country’s failed approach to marijuana.”

“The President, in his announced policy on marijuana, has waived the flag of surrender in the fight to save lives from drug abuse and has adopted all the talking points of the drug legalizers,” Hutchinson said. “Biden is simply playing election-year politics and sacrificing our national interest to win votes.”

“We commend this important and necessary step to begin the process of repairing the harms of prohibition and look forward to working with Congress and the administration to develop policies that would ultimately solve the underlying problems in our outdated cannabis policies,” Aaron Smith, Co-founder and CEO of the National Cannabis Industry Association said in a statement.

The Drug Policy Alliance said it was “thrilled” by Biden’s decision, which they called “incredibly long overdue.”