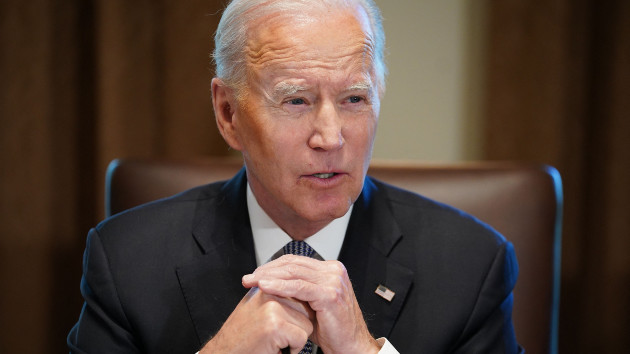 (WASHINGTON) — President Joe Biden on Thursday announced an additional $800 million package in military assistance to Ukraine — as well as a ban on all Russian-affiliated ships from U.S. ports — as Russian forces launch a long-expected, large-scale campaign to seize the country’s east.

“We’re in a critical window now of time where — they’re going to set the stage for the next phase of this war,” Biden said from the White House Roosevelt Room, adding the U.S. and allies will continue to provide Ukraine with “equipment they need — their forces need — to defend their nation.”

Biden said the new aid package will include “heavy artillery weapons, dozens of howitzers, and 144,000 rounds of ammunition to go with those howitzers,” as well as tactical drones.

It follows another of similar size, which Biden announced last week, but focuses more on artillery and ammunition, U.S. officials told ABC News earlier this week.

Biden said the U.S. has sent “equipment that is responsive to Ukraine’s needs and tailored to support the intensified fighting in the Donbas region, which is a different war than in other places because both topographically, it’s different — it’s flat, it’s not in the mountains — and it requires different kinds of weapons to be more effective.”

“Every American taxpayer, every member of our armed forces can be proud of the fact that our country’s generosity — and the skill and service of our military — helped arm and repel Russia’s aggression in Ukraine to beat back Putin’s savagery that tried to seize Ukraine’s capital and wipe out Ukraine’s government,” Biden added.

With this latest package, the U.S. is on track to having announced about $3 billion in military aid since the start started in late February. In particular, this is the eighth tranche of U.S. assistance from the Pentagon’s existing stockpile, using what’s known as presidential drawdown authority to expedite delivery.

As more than 5 million have fled Ukraine since the war began, Biden also announced a new program dubbed “Unite for Ukraine” to fast-track Ukrainian refugees coming to the U.S.

“This new humanitarian parole program will complement the existing legal pathways available to Ukrainians, including immigrant visas and refugees processing” and “provide an expedient channel for secure legal migration from Europe to the United States for Ukrainians, who have a U.S. sponsor such as a family or an NGO,” Biden said.

“This program will be fast, it will be streamlined, and will ensure the United States honors its commitment to go to the people of Ukraine and need not go through our southern border,” Biden added.

“That means no ship, no ship that sails on the Russian flag or that is owned or operated by Russian interest would be allowed to dock on the united States port or access our shores. None,” he said.

After meeting with Ukraine’s Prime Minister Denys Shmyhal ahead of his remarks, Biden again called on Congress to provide more funding for weapons and ammunition because existing money is “almost exhausted,” he said, even with an additional $500 million in economic aid to Ukraine’s government the Treasury Department also announced Thursday, separate from the latest $800 million military package.

Russia offered another ultimatum Wednesday to allow Ukrainian fighters to leave a steel plant in Mariupol — but those fighters, for days, have refused to surrender. Finally seizing the strategic port city after weeks of besiegement and bombardment would help give Russian forces a land bridge between Crimea, which Russia has occupied since 2014, and the eastern provinces known as the Donbas, where Russian-led separatists have battled the Ukrainian government since 2014, too.

The Donbas is expected to be Russia’s focus now, but the U.S. remains concerned that Russian forces will target the paths in western Ukraine being used to ship Western military aid into the country, a defense official told ABC News.

While they have not done so yet, cutting off those supply routes will help the Kremlin isolate Ukrainian forces in the east, the official added.

The U.S. believes Russians will target the paths in western Ukraine being used to ship in Western military aid in order to isolate Ukrainian forces in the east, a defense official told ABC News.

“Right now, we know from our discussions with the Ukrainians that they are getting this material,” a defense official said Tuesday. “It’s getting into the hands of their fighters.”

Those missiles have been used by Ukrainian forces to great effect, but as the battle shifts from Ukraine’s major cities and suburbs to the more flat eastern provinces, Kyiv’s troops will need more artillery and ammunition instead.

Four flights carrying military aid from the $800 million drawdown package Biden announced last week arrived in Ukraine over the last 24 hours, some of them carrying U.S. howitzers and 155mm ammunition for them, a senior defense official said Wednesday, adding more equipment will arrive over the next 24 hours.

ABC News asked the official why the U.S. decided to send U.S. artillery to the Ukrainians.

“We’re mindful of the importance of artillery in the fight that they’re in right now and in the fighting in the days to come because of the terrain, and because of what we think they’re going to be up against with Russian forces,” the official responded. Another reason was “the fact that it wouldn’t require an onerous amount of training for the Ukrainians to know how to use them” and the ability to ship them quickly, according to the official.

After Biden called Russia’s actions in Ukraine “genocide” for the first time last week, Secretary of State Antony Blinken warned Wednesday that the same horrors witnessed in Bucha — “death, destruction, atrocities” — may take place in the eastern city of Mariupol “at some point,” even as Russian forces seem already poised to fully capture the strategic city.

“We can only anticipate that when this tide also at some point recedes from Mariupol, we’re going to see far worse — if that’s possible to imagine,” Blinken said. “So the conditions there, the situation there as a result of this Russian aggression are truly horrific.”