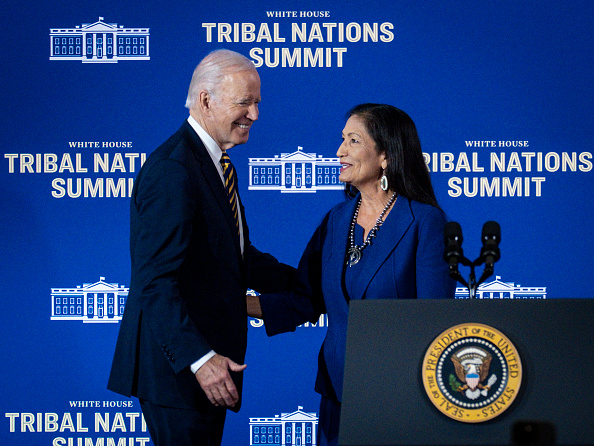 “On my watch, we’re ushering in a new era and advancing a way for the federal government to work with tribal nations,” Biden said as he spoke at the first in-person White House Tribal Nations Summit in six years, knocking his predecessor for not hosting any such forum.

Biden announced $135 million to help tribal communities impacted by climate change. Eleven “severely impacted tribes” will receive funds, according to the Interior Department, and three are planning on relocating entirely to new areas: the Newtok Village in Alaska, the Native Village of Napakiak in Alaska, and the Quinault Indian Nation in Washington.

“There are tribal communities at risk of being washed away, washed away by superstorms, rising sea levels and wildfires raging,” Biden said Wednesday, calling the damage “devastating.”

“Together, my entire administration is advancing the economic agenda and making historic investments in Indian country and, I might add, that are long overdue,” Biden said.

Over 300 tribal representatives are expected to attend the two-day summit held at the Interior Department. Biden began his remarks by thanking Interior Secretary Deb Haaland for her leadership, noting she’s the first Native American to serve as a Cabinet secretary.

Haaland, introducing Biden to the podium, said the investments made by the Biden administration are “already improving the lives of so many.”

“You and I know firsthand that native people have not always had friends in the White House,” she said.

Among the new investments and changes announced by the White House to strengthen tribal nations are a presidential memo standardizing how federal agencies consult with tribes, requiring federal agencies to recognize “Indigenous Knowledge” in research and decision-making, and a draft of a 10-year plan to revitalize native languages. Federal agencies will also buy more electricity and energy products from tribes, and announce a new initiative to build electric vehicle charges on tribal lands.

“I’m committed to protecting this sacred place that is central to the creation story of so many tribes that are here today,” Biden said, adding there’s “so much more that we’re going to do to protect the treasured tribal lands.

“Everyone’s entitled to be treated with respect and dignity, the dignity that comes from just being who you are,” Biden said as he closed his remarks. “This is especially true for tribal nations. The United States owes a solemn trust and treaty obligations that we haven’t always lived up to.”