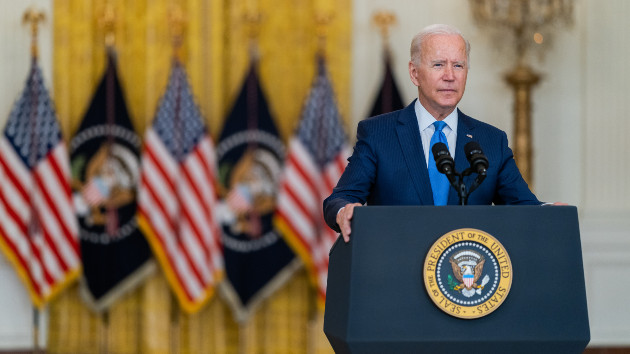 (WASHINGTON) — President Joe Biden announced Tuesday that the U.S. will ban imports of Russian oil and other energy products, but will not be joined in doing so by many European allies and partners.

The move is expected to trigger sharply higher gasoline and other energy prices in the U.S. and worldwide.

Speaking from the White House, he said it means “the American people will deal another powerful blow to Putin’s war machine.”

The decision was made in “close consultation” with U.S. allies, some of whom he said would not be “in a position” to do the same but he stressed the alliance remained united.

Biden has been under growing political pressure from both Democrats and Republicans on Capitol Hill to go forward with a ban even though the White House initially resisted, saying it wasn’t in the U.S. “strategic interest” to limit the world’s energy supply and drive up gasoline prices.

On Monday, top lawmakers announced they had come to a deal on bipartisan legislation that would punish Russia for its invasion of Ukraine, by banning the import of Russian oil and other energy products — as well as suspending normal trade relations with Russia and a House vote was expected this week.

Biden’s announcement is likely to cause gasoline prices in the U.S. — already at record highs — to soar even higher.

“I’m going to do everything I can to minimize Putin’s price hike here at home,” Biden said.

White House officials also say the impact on Russia, which sent just 1% of its oil exports to the U.S. in 2020, would not be great — especially when its oil and gas sector is already “de facto sanctioned” because of harsh restrictions on Russian banks.

There is less appetite in Europe for a ban on Russian oil and gas imports, since European nations rely heavily on Russia for their energy needs — nearly half of Russian oil exports go to Europe, according to U.S. government figures — and analysts say a ban would raise Europe’s energy prices significantly.