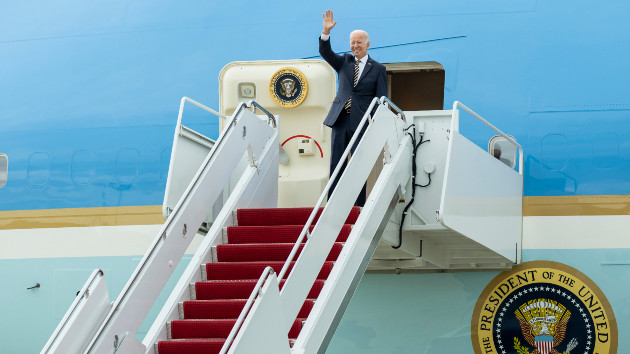 (WASHINGTON) — President Joe Biden, a pro-union president, on Labor Day kicks off the the unofficial start of the fall campaign season ahead of the midterm elections with two cross-country stops in battleground states.

Biden, the White House says, will deliver remarks “celebrating Labor Day and the dignity of American workers,” in Wisconsin and Pennsylvania, after a string of legislative victories and a slight bump in approval ratings.

Biden travels first to Milwaukee to speak about 1:00 p.m. at the city’s Laborfest, with Democratic Gov. Tony Evers — up for reelection in November against Republican Tim Michels — expected to make an appearance.

Ahead of his visit, Republican National Committee and the Wisconsin Republican Party hosted a Zoom call, slamming the president’s Thursday primetime speech in Philadelphia and his recent moves to cancel up to $20,000 in student loan debt.

Johnson was on the Zoom, calling the president “no moderate” and that he has become a “divider-in-chief.” Johnson noted that his Democratic opponent has been “in hiding” and that Barnes has not been doing any recent press conferences. One of Barnes’ most recent events was a meet and greet with seniors on Aug. 29 on the subject of Social Security and Medicare, in response to recent Johnson comments on potentially cutting those programs.

From Milwaukee, Biden travels to Pittsburgh where he is scheduled to make more Labor Day remarks at 5:30 p.m at United Steelworkers of America Local Union 2227 — the third time the president has visited the commonwealth in one week.

In a tweet, Fetterman’s director of communications said that the candidate will also be marching with Biden — the first time the candidate has joined the president during his weeklong span of the state — with plans to discuss marijuana decriminalization.

“John will be marching in the Labor Day parade in Pittsburgh next week, and he looks forward to talking to the President there about the need to finally decriminalize marijuana,” wrote Joe Calvello.

Democratic Attorney General Josh Shapiro is also facing a tight race against Trump-endorsed Republican Doug Mastriano for governor. Shapiro will also march with Biden on Monday, following his appearance with the president at Wilkes University on Tuesday.

In Pittsburgh, Shapiro will be “marching with the hardworking men and women of labor on Monday,” Manual Bonder, a spokesperson for Shapiro, said in a statement. “As always, we welcome President Biden back to his home state of Pennsylvania.”

On Thursday in Philadelphia, Biden, in a fiery speech, warned about what he called threats to American democracy, presenting himself and Democrats ahead of the midterms as a clear contrast to Trump and MAGA Republicans.

He pummeled Republicans who participated in the Jan. 6 insurrection, and those who refuse to accept the 2020 election results and want to strip away abortion rights.

“Too much of what’s happening in our country today is not normal,” he said. “Donald Trump and the MAGA Republicans represent an extremism that threatens the very foundations of our republic.”