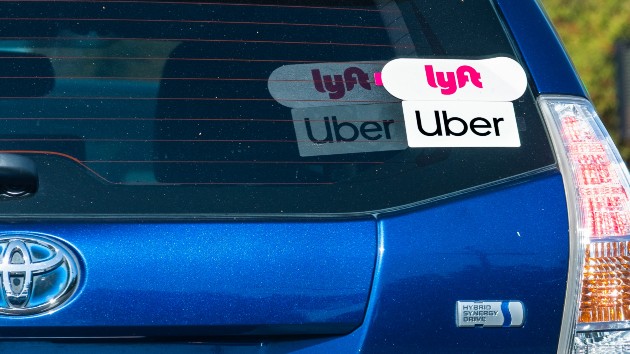 (WASHINGTON) — Last week, when the White House announced an agreement with Uber and Lyft to offer free rides to vaccine sites as part of President Joe Biden’s aim to inoculate 70% of Americans against the coronavirus by the Fourth of July, the partnership drew praise but also questions.

The administration touted the arrangement as an answer to one of the vaccine effort’s toughest challenges: how to help people with limited transportation options get their shots. But it’s also drawn fresh attention to the role several senior administration officials played prior to serving in the administration in working and advocating for the ridesharing app companies — relationships already under scrutiny as the companies wade through government regulations and manage contentious labor disputes.

Among those who have in the past accepted payments from the Silicon Valley-based firms are Biden’s national security adviser, his deputy chief of staff and his press secretary — and given these connections, ethics experts say it is an arrangement that warrants scrutiny.

“Whenever wealthy corporations with big lobbying operations secure a deal like this, we need to take a hard look at whether there were improper influence efforts involved,” said Delaney Marsco, ethics legal counsel for the Washington-based nonprofit Campaign Legal Center. “In the absence of more robust lobbying disclosures, you really are relying on kind of the government acting in good faith to make sure that the public’s interests are being put first and that they’re disclosing what’s going on and how the government is working.”

The White House says that officials with past connections to the companies did not participate in discussions about the vaccine effort.

But ethics experts said that the deal with Uber and Lyft highlights a familiar challenge in Washington: how to prevent conflicts of interest when government officials cycle through a “revolving door” in and out of the private sector — a path that at times affords companies the possibility to improperly influence federal policy.

“This is a partnership that’s going to boost access to vaccines and save lives without costing the taxpayers a single cent, and it builds on the incredible work we have done with partners in the public and private sectors to significantly expand access to vaccines,” said White House spokesperson Mike Gwin. “The Biden-Harris Administration has the highest ethical standards of any White House.”

Uber and Lyft have already shown an interest in exerting influence on both the U.S. government and the administration of President Biden, who has a long record of backing unions and whose administration has already taken steps to support gig workers. In just the first quarter of this year, Uber spent at least $540,000 on lobbying the federal government, including funds spent fighting a Biden-supported bill that would help classify gig workers as employees, while Lyft has spent roughly $430,000 on similar lobbying, according to lobbying disclosure reports. Last year, the two companies together spent more than $4.8 million on lobbying.

A White House official said the Uber and Lyft partnership is part of the White House’s efforts to vaccinate young people who are willing to get inoculated but need easier access, and that Uber and Lyft will not be compensated by the government for rides to and from the vaccination centers. But advocacy groups fear that Uber and Lyft may seek to leverage their free services to curry favor with the administration in a form of “soft lobbying.”

“We hope the Biden administration would not abandon their promises to gig workers to repay the favor,” said Alex Catsoulis, a spokesperson for the advocacy group Gig Workers Rising.

Walter Shaub, the former director of the Office of Government Ethics, said companies should not be disqualified from partnering with the public sector just because there are people in government who used to work for them. But in a broader context, Shaub said he remains “concerned about people leaving major corporations or big law firms that represent major corporations and coming into government and work on policies that benefit their former employers or clients.”

“That’s why transparency about [recusals] is also important, so we can be sure that doesn’t happen,” said Shaub, who now leads an ethics initiative at the nonpartisan government watchdog Project On Government Oversight.

Biden administration officials are covered by ethics rules put in place by President Biden that prohibit officials from participating in matters related to their past and current financial interests, a measure that has been commended by several ethics experts as a strong safeguard against potential conflicts of interest.

A White House official told ABC News that the Uber and Lyft partnerships came to fruition solely from brief phone calls between White House vaccine coordinator Andy Slavitt’s team and the CEOs of the companies, with no involvement from other members of the administration who had worked for the companies or registered lobbyists working on behalf of the companies.

“What I’ve learned in this crisis is that, in a crisis, if you ask people to help and they can, they also will,” Slavitt told ABC News.

“Over the course of the pandemic, we’ve worked with numerous partners to donate tens of millions of free rides and deliveries, including to help people access vaccines,” Uber spokesperson C.R. Wooters said in a statement to ABC News. “When the White House called and asked us to do more we were happy to help.”

But concerns about any potential for a conflict have been heightened as the companies continue battling efforts by unions to help gig workers get benefits and protections as employees.

Biden’s top labor adviser within the White House is Seth Harris, an Obama-era acting labor secretary who once penned a policy paper that Uber and Lyft later used as a blueprint to keep its drivers from being classified as employees but instead classified as “independent workers” not eligible for overtime or minimum wage. Biden National Security Adviser Jake Sullivan had served as a consultant for Uber, his personal financial disclosure report shows. His disclosure doesn’t detail his specific work for the company, but labor advocates say that he was involved in negotiating labor disputes on behalf of ridesharing apps in California.

Outside of the administration, Tony West, Vice President Kamala Harris’ brother-in-law and a former senior official in the Obama Justice Department, is Uber’s chief legal officer. Biden’s transition team had also included high-ranking executives from the companies. Lyft CEO Logan Green’s chief of staff, Brandon Belford, was previously with the Obama White House and was part of Biden’s transition team, as was fellow former Obama administration official Matt Olsen, who is currently the chief trust and security officer at Uber.

And as both Uber and Lyft continue their state and federal lobbying efforts, former aides to Biden and those with ties to the Obama administration have jumped in to represent the companies in recent months. Biden’s former director of legislative affairs, Sudafi Henry, is lobbying Congress on behalf of Lyft, former Obama Transportation Department official Dan Katz is part of Lyft’s team lobbying federal agencies, and most recently, Uber has hired Alexis Finneran Tkachuk, a former chief labor counsel for Labor Secretary Marty Walsh back when Walsh was mayor of Boston.

In recent years, the rideshare app industry has fought to prevent its drivers from unionizing, which companies say would place a substantial burden on their fragile financial viability. In California alone, Uber and Lyft pumped tens of millions of dollars into the passage of a law that exempted the firms from classifying drivers as employees and kept the companies from having to pay them benefits.

For union advocates, Biden’s decision to lean on the ridesharing apps is a provocative step for a president who came into office regarded by some as the most pro-union president since Franklin Delano Roosevelt. Steve Smith, a spokesperson for the California Labor Federation, warned that “by partnering with Uber and Lyft … the administration risks tacitly condoning a business model built for exploitation.”

But some government watchdogs say that concern over Biden’s partnership with the ridesharing apps is offset in part by his overwhelmingly pro-union posture after four months in office.

Perhaps most notably, Biden’s administration recently rolled back a Trump-era rule that would have made it easier for companies to classify workers as independent contractors. Labor Secretary Walsh said the move would “help preserve essential worker rights and stop the erosion of worker protections.”

After the White House partnership was announced, executives at Uber and Lyft took the opportunity to promote their commitment to combatting the pandemic. Both firms had already struck similar deals with CVS and Walgreens to provide transportation for those getting the vaccine.

“We are honored to deepen our previous global commitments,” said Uber CEO Dara Khosrowshahi. “This is a proud moment for me, for Uber, and for our country.”

But some driver advocates say the company’s actions should still be scrutinized.

“This brief partnership should not deter the Biden administration from protecting app-based workers, who are still being exploited,” said Catsoulis.