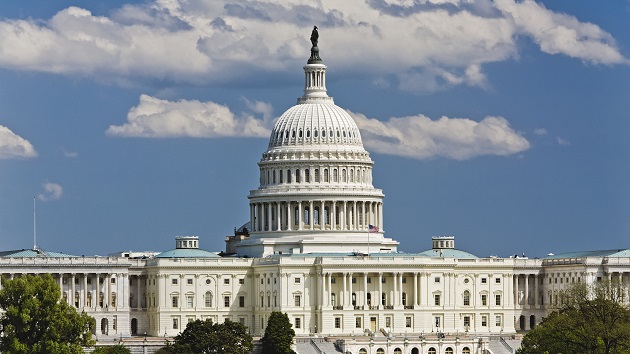 (WASHINGTON) — As a bipartisan group of senators — a smaller subset of the original group of 10 — prepared to meet in person on Monday night to go over options for possible gun legislation, members from both sides of the aisle were expressing optimism that some kind of deal may come together by week’s end, with Democrats cautioning against allowing talks to drag out.

“My goal is to reach an agreement by the end of the week. We have more Republicans and Democrats sitting together than ever before — since Sandy Hook. What we’re talking about is substantial. It will save lives,” lead Democratic negotiator Chris Murphy, of Connecticut, told ABC News’ Rachel Scott. “While I’m certainly prepared to fail, I’m more hopeful for success than ever before.”

“We’re trying to get a bipartisan outcome here that makes a difference, and hopefully sometime this week we’ll come together,” Senate Minority Leader Mitch McConnell told reporters, echoing Murphy, though he mentioned no specifics.

And while there was a palpable sense of cautious optimism in the air — as the latest round of negotiations continued in the wake of the latest mass shootings — there was also a sense of fragility in what has been happening behind the scenes. GOP aides, in particular, remained incredibly sensitive about the talks, taking time to correct reporters on various ideas that were potentially on the table.

One suggestion, for example, was an expansion of current federal background checks. But an aide to lead Republican negotiator John Cornyn, of Texas, cautioned the press that any changes to the law would not expand but rather strengthen the system for those already subject to a background check.

Cornyn, in a floor speech on Monday, indicated that the focus was on mental health and school safety, two subjects that appear to be safer political territory for Republicans, many of whom argue restrictions on firearms, including on once-banned assault weapons, violate the Second Amendment.

“Over the last week and a half, I’ve been talking particularly with Sen. Murphy, Sen. [Thom] Tillis, Sen. [Kyrsten] Sinema, but literally with everybody I can reach on the phone or get through text message to see if there’s some package of mental health and safety legislation that addresses some of the factors that might have prevented the recent shootings in Uvalde and elsewhere,” Cornyn said.

He added, “I want to be clear, though: We are not talking about restricting the rights of current law-abiding gun owners or citizens.”

“What I’m interested in is keeping guns out of the hands of those who, by current law, are not supposed to have them,” Cornyn said. “People with mental health problems, people who have criminal records. Again, this is about the art of the possible. In order to deliver results, we have to build consensus, and the best way to do that is through targeted reforms.”

While no vote is expected this week, lawmakers, specifically Democrats, are eyeing a fast-approaching deadline of the end of the week for a compromise to be in hand. The majority party is conscious of the painful lessons learned by the failure of the sweeping social, economic and climate legislation — known as Build Back Better — that they attempted to fast-track after retaking Congress in 2021, only to see members of their own party tank the bill’s chances following months of grinding talks.

“Look at reconciliation. The failure to have a real, finite deadline led us on and on and on, month after month, and we ended up empty-handed. So I think Chuck [Schumer] was right in saying to the negotiators, ‘I’m glad you’re meeting but do something and do it in a timely fashion.’ Otherwise it would drag out and otherwise American people would lose their faith in our ability to respond in any way,” the Senate’s No. 2 Democrat, Illinois’ Dick Durbin, told reporters Monday, referring to the majority leader’s position on the latest round of talks.

Durbin said he wouldn’t call Friday a “final deadline,” but he signaled there would be little patience with anything too far beyond that.

Sen. Richard Blumenthal, D-Conn., also a negotiator, told Rachel Scott that it was time for Republicans to “put up or shut up.”

But Cornyn warned on Monday against pressuring for a deal.

“I will not settle on inadequate or downright harmful legislation for the sake of doing something. That’s not productive for anyone,” he said. “That’s one of the things I hear the most: People say, ‘Do something.’ Well, we can agree something needs to be done. But what that something is is much harder to achieve — and so targeted reforms, I think, are the way to get to where we need to go.”

One unusual, A-list lobbyist in Congress this week: Actor Matthew McConaughey — a native of Uvalde, Texas, where a gunman massacred 21 at an elementary school last month — who was on the Hill on Monday evening to talk gun safety. An aide familiar with the matter told ABC News that the actor planned to discuss the issue with the bipartisan Senate group as well as some House lawmakers.

Negotiators have met at least four times during the weeklong recess that just ended, but aides told ABC News that a deal was far from ready. Paper has been exchanged behind the scenes with negotiators working to build consensus in the hope of unveiling a bill that can garner at least a filibuster-proof 60 to 70 votes in the Senate.

Meanwhile, Sen. Joe Manchin, D-W.Va., a negotiator working on background checks for commercial sales, told ABC News on Monday that he would support increasing the age from 18 to 21 for adults to be able to purchase a semi-automatic weapon like the AR-15s that are repeatedly used in mass shootings.

“We know two things that would have stopped this: One, if the age was at 21; and also if there were ‘red flag’ laws,” said Manchin, referencing legislation that allows law enforcement, with a court order, to temporarily seize guns from those deemed a danger to themselves or others.

“There are no red lines. We’ve got to do something. We have to bring gun sense into America,” Manchin said.

But an age restriction is not something Republicans are interested in doing.

Democrats seem resigned to accepting a compromise that will not contain anything near what they want — despite President Joe Biden’s push otherwise — but doing something is the goal in the face of so much carnage, they have said.

“I can guarantee you despite their best efforts, they will for sure fall short of what I want to see done,” Durbin told reporters of the possible deal. “But as [is] the nature of a 50-50 Senate and political compromise, we ought to see anything that is a sensible way to reduce gun violence.”