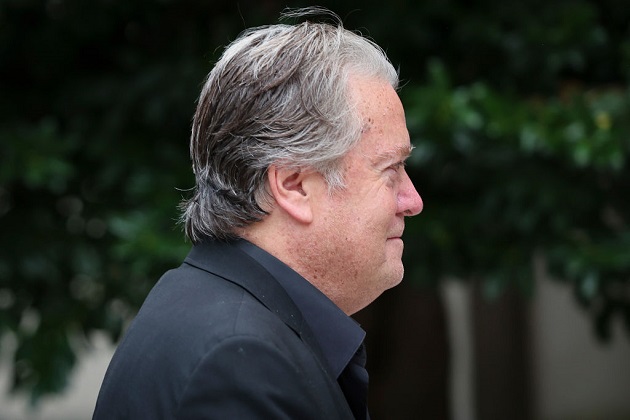 (WASHINGTON) — Steve Bannon, who served as former President Donald Trump’s chief strategist before departing the White House in August 2017, is on trial for defying a subpoena from the House select committee investigating the Jan. 6 attack on the U.S. Capitol.

Bannon was subpoenaed by the Jan. 6 panel for records and testimony in September of last year, with the committee telling him it had “reason to believe that you have information relevant to understanding activities that led to and informed the events at the Capitol on January 6, 2021.”

After the House of Representatives voted to hold him in contempt for defying the subpoena, the Justice Department in November charged Bannon with two counts of criminal contempt of Congress, setting up this week’s trial.

Here is how the news is developing. All times are Eastern.

Jul 19, 3:55 PM EDT
Defense tells jury ‘there was no ignoring the subpoena’

Bannon’s defense attorney Matt “Evan” Corcoran said in his opening statement that “no one ignored the subpoena” issued to Bannon, and that “there was direct engagement by Bob Costello,” Bannon’s attorney, with the House committee, specifically committee staffer Kristin Amerling.

He said Costello “immediately” communicated to the committee that there was an objection to the subpoena, “and that Steve Bannon could not appear and that he could not provide documents.”

“So there was no ignoring the subpoena,” Corcoran said. What followed was “a considerable back and forth” between Amerling and Costello — “they did what two lawyers do, they negotiated.”

Corcoran said, “the government wants you to believe … that Mr. Bannon committed a crime by not showing up to a congressional hearing room … but the evidence is going to be crystal clear no one, no one believed Mr. Bannon was going to appear on Oct. 14, 2021,” and the reasons he couldn’t appear had been articulated to the committee.

Corcoran told the jury that the government has to prove beyond a reasonable that Steve Bannon willfully defaulted when he didn’t appear for the deposition on Oct. 14, 2021 — “but you’ll find from the evidence that that date on the subpoena was the subject of ongoing discussions” and it was not “fixed.”

In addition, Corcoran told jurors, you will hear that “almost every single one” of the witnesses subpoenaed led to negotiations between committee staff and lawyers, and often the appearance would be at a later date than what was on the subpoena.

Corcoran also argued that the prosecution may have been infected by politics, telling the jury that with each document or each statement provided at trial, they should ask themselves: “Is this piece of evidence affected by politics?”

Continuing her opening statement, federal prosecutor Amanda Vaughn told the jury that the subpoena to Bannon directed him to provide documents by the morning of Oct. 7, 2021, and to appear for a deposition the morning of Oct. 14, 2021 — but instead he had an attorney, Robert Costello, send a letter to the committee informing the committee that he would not comply “in any way,” she said.

“The excuse the defendant gave for not complying” was the claim that “a privilege” meant he didn’t have to turn over certain information, Vaughn said. “[But] it’s not up to the defendant or anyone else to decide if he can ignore the [request] based on a privilege, it’s up to the committee.”

“You will see, the defendant’s failure to comply was deliberate here,” Vaughn told the jury. “The only verdict that is supported by the evidence here: that the defendant showed his contempt for the U.S. Congress, and that he’s guilty.”

So, Vaughn told the jury, Congress gave Bannon a subpoena “that mandated” he provide any information he might have.

“Congress was entitled to the information it sought, it wasn’t optional,” Vaughn said. “But as you will learn in this trial, the defendant refused to hand over the information he might have.”

Vaughn said Bannon ignored “multiple warnings” that he could face criminal prosecution for refusing to comply with the subpoena and for preventing the government from getting “important information.”

“The defendant decided he was above the law and decided he didn’t need to follow the government’s orders,” she said.

Prior to opening statements, the judge made clear to the jury that the Justice Department has the burden to prove four distinct elements “beyond a reasonable doubt”:

(1) that Bannon was in fact subpoenaed for testimony and/or documents;

(2) that the testimony and/or documents were “pertinent” to the Jan. 6 committee’s investigation;

(3) that Bannon “failed to comply or refused to comply” with the subpoena;

(4) that the “failure or refusal to comply was willful.”

A 14-member jury has been sworn in for the contempt trial of ex-Trump strategist Steve Bannon.

Of the 14 jurors, nine are men and five are women.

The swearing-in of the jury comes after U.S. District Judge Carl Nichols denied the defense’s request for a one-month delay of the trial, which attorneys for Bannon argued was necessary due to a “seismic shift in the understanding of the parties” of what the government’s evidence will be.

“We have a jury that is just about picked,” Nichols said in denying the request for a one-month continuance.

One of the jurors, a man who works for an appliance company, said Monday during jury selection that he watched the first Jan. 6 committee hearing and believes the committee is “trying to find the truth about what happened” on Jan. 6.

Another juror, a man who works as a maintenance manager for the Washington, D.C., Parks and Recreation department, said he believes what happened on Jan. 6 “doesn’t make sense.”

Another juror, a woman who works as a photographer for NASA, said “a lot” of her “photographer friends were at the Capitol” on Jan. 6, and she has watched some of the Jan. 6 hearings on the news.