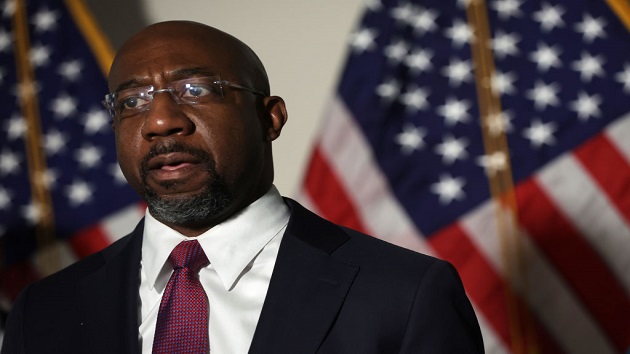 (WASHINGTON) — As she presided over Thursday’s historic confirmation vote for Ketanji Brown Jackson to become the first Black woman to sit on the Supreme Court, Vice President Kamala Harris gave an assignment to Sens. Raphael Warnock and Cory Booker — the only two Black Democrats in the Senate: Write a letter, using the vice president’s official stationery, to a young Black girl in their lives.

Before the vote, Warnock, speaking on the Senate floor, had spoken of the historic aspect of Judge Jackson’s confirmation by talking about his own daughter.

“Yes I’m a Senator, I’m a pastor, beyond all of that I am a father of young Black girl. I know how much it means for Judge Jackson to have navigated the double jeopardy of racism and sexism to now stand in the glory of this moment, in all of her excellence,” Warnock said.

“For my five-year-old daughter and for so many young women in our country, but really if we’re thinking about it right for all of us, seeing Judge Jackson ascend to the Supreme Court reflect the promise of progress on which on democracy rests. So, what a great day it is in America,” he said.

Later, Warnock shared on Twitter “Dear Chloé, Today, we confirmed Ketanji Brown Jackson to the United States Supreme Court,” he wrote. “In our nation’s history, she is the first Supreme Court Justice who looks like you – with hair like yours.”

Booker said he has not yet decided who will get his letter.

After the vote, Harris said, “There is so much about what’s happening in the world now that is presenting the worst of … human behavior,” Harris said. “And then we have a moment like this that I think reminds us that there is so much left to accomplish.”