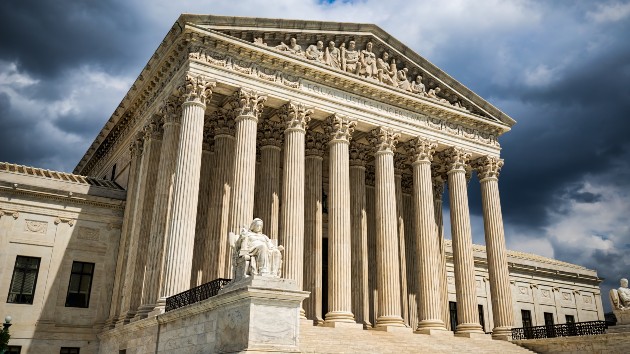 (WASHINGTON) — Among the most hotly anticipated decisions as the U.S. Supreme Court closes out the term this month is whether its oldest member and most senior liberal will call it quits.

Justice Stephen Breyer, who is still in apparent good health and showing passion for the job, has given no indication he will retire this year, but he faces extraordinary outside pressure from Democratic activists to step down.

Last week, a group of 18 progressive legal scholars published a full-page ad in the New York Times saying “it is best for the country” if Breyer retires immediately, while a coalition of left-wing advocacy organizations warned in Politico of a dire threat to “our democracy and the rights of marginalized communities” if he remains.

Many Democrats fear shifting political winds could cost them control of the U.S. Senate in the 2022 midterm elections, imperiling their ability to confirm a liberal replacement to Breyer at a time when the court is already the most conservative in a generation.

Last week, Senate Republican Leader Mitch McConnell threatened to potentially hold up any Supreme Court nomination by Democratic President Joe Biden made in 2023 or 2024, well ahead of the next presidential election.

There’s no reason to believe Breyer is paying close attention to any of the campaigning or that he would give much weight to the arguments.

Supreme Court justices are appointed for life tenure and retirement is entirely at the discretion of each individual justice. The Constitution states that justices “shall hold their offices during good behavior” and can only be removed from office by impeachment.

Breyer, who was appointed by President Bill Clinton and confirmed by the Senate 87-9 in 1994, has long advocated that justices are not politicians beholden to the parties of the presidents who appoint them. He has argued that public confidence in the court hinges on the appearance of independence, and many court analysts note that Breyer would likely want to avoid any appearance of bowing to political pressure in deciding to step down.

With days left before the court breaks for summer recess, Breyer is as active as ever in cases, authoring the major 7-2 decision upholding Obamacare for a third time. He has hired a full slate of four clerks for next term and is preparing to promote a new book set for release in September, the Authority of the Court and the Peril of Politics.

The court’s next term, which begins in October, features a blockbuster lineup of cases including gun rights and abortion — issues on which Breyer has been passionately engaged and may wish to participate in further.

Some commentators suggest McConnell’s recent public statements — that critics say threaten hyper-politicization of the confirmation process if a court vacancy occurs in the next few years — could convince Breyer to retire sooner rather than later.

“The question he faces is, what is the best way to protect the court’s power?” Washington Post columnist and Supreme Court analyst Ruth Marcus wrote this month. “Blocking another nomination would not only threaten to shift an already-conservative court even further to the right if Democrats lose the White House in 2024 — it would also trigger yet another cycle of partisan retribution in the never-ending confirmation wars.”

Publicly, Breyer has professed to never embrace a political strategy in his decision-making since being confirmed, vowing to insulate himself from the partisan firestorms that often engulf the court from the outside.

Last month, in a virtual Q&A with high school civics students, Breyer said the biggest lesson he’s learned in nearly three decades as one of the nine justices is “don’t let up.”

“As you get older, you think that’s a very big virtue, a very big virtue,” he said, “because what we have, all of us, whatever it is — everybody has ‘something,’ and to be in a situation where you have to use that ‘something’ really you hope for the benefit of other people, that is a privilege.”