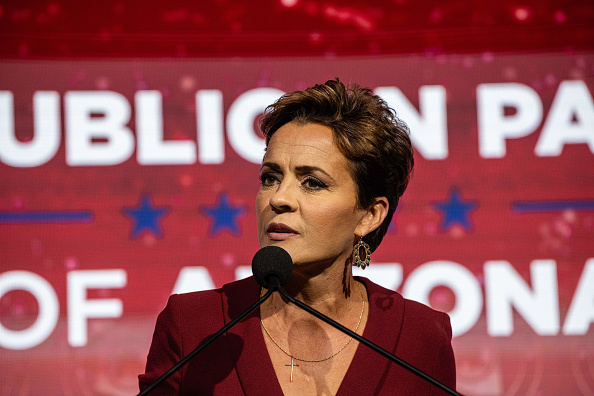 (PHOENIX) — Elected officials in Arizona certified the state’s election results on Monday in a formal canvassing ceremony at the state Capitol, initiating the start of recounts and potential lawsuits, which couldn’t begin by law until after the canvassing.

Secretary of State Katie Hobbs, the Democratic governor-elect, presided over the official certification, to the outcry of some Republicans, including her competitor Kari Lake, who was expected to challenge the vote. During the campaign, Lake repeatedly called on Hobbs to recuse herself from her role, but Hobbs maintained she carried no conflict of interest since former secretaries of state have certified their own election wins and because her office does not count the votes.

At the start of the certification process, Hobbs spoke about the importance of protecting democracy and looked to the next major election in 2024.

“Arizona had a successful election, but too often throughout the process, powerful voices proliferated misinformation that threatened to disenfranchise voters,” Hobbs said. “Democracy prevailed, but it’s not out of the woods.”

“2024 will bring a host of challenges from the election denial community that we must prepare for, but for now, Arizonans to stand proud knowing that this election was conducted with transparency, accuracy and fairness in accordance with Arizona’s election laws and procedures,” she added.

Outgoing Republican Gov. Doug Ducey and Arizona Supreme Court Chief Justice Robert M. Brutinel flanked Hobbs for the canvassing ceremony, along with outgoing Republican Attorney General Mark Brnovich, who investigated claims of election fraud in the 2020 election but did not find anything substantial.

“There’s no better place in the nation to build a successful life” than in Arizona, Ducey said. “Let us remember this as we certify the election and begin this next chapter.”

Brnovich made a point of noting that the governor and attorney general don’t officially certify the election but serve as witnesses in the ceremony.

“I’m reminded what John F. Kennedy often said, those who ride the tiger to seek power often end up inside,” he added.

While Ducey shook hands with Hobbs after the canvass, Brnovich was quick to stand and leave the room.

Monday’s certification triggers automatic recounts in three qualifying races — including the attorney general race, where Democrat Kris Mayes leads by just 511 votes — and opens a five-day window in which legal challenges to the vote can be filed in court.

Lake’s campaign told ABC News on Monday that she still plans to file legal challenges to the election results. Republican Abe Hamadeh, also backed by former President Donald Trump, like Lake, is expected to file a challenge as well.

For weeks, Lake has repeated grievances on social media with Maricopa County’s printer issues on Election Day, calling on officials to resign and retweeting requests for a new election. Maricopa officials have maintained that voters in the state’s largest county were not disenfranchised because other options were presented on Election Day, and have cited a record number of “late early” ballots dropped off on Election Day as the reason why it took several days to count votes.

Lake faced legal blowback of her own just last week when a federal judge issued sanctions against an attorney who represented her and Republican Mark Finchem in a lawsuit inaccurately claiming electronic voting machines weren’t secure or accurate.

U.S. District Court Judge John Tuchi wrote he would “not condone litigants … furthering false narratives that baselessly undermine public trust as a time of increasing disinformation about, and distrust in, the democratic process.”

Hobbs’ office did not allow in-person attendance for Monday’s canvass. Although the event was streamed live, as it’s required to be public by law, audio was not working on a Zoom link provided by the secretary’s office, and another Facebook link was down.

Blake Masters, who lost his challenge against Democratic Sen. Mark Kelly, is the only statewide Republican candidate so far to concede their race. The RNC recently announced he would be joining an advisory council. Masters has called on Republicans to adapt to early-voting expansions in the wake of midterm losses.