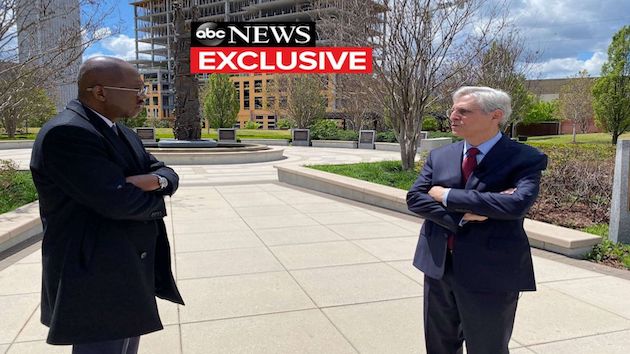 (TUSLA, Okla. ) — Two days after an American terrorist visited death and destruction on the heartland, a slight, soft-spoken lawyer in Washington, D.C., was dispatched to run the investigation and prosecution that would bring justice to the victims of the Oklahoma City bombing.

That lawyer was Merrick Garland.

“This is a problem that the country has never been able to eliminate,” Garland said Monday of the anti-government and racial hatred that fueled the April 19, 1995, bombing.

“There was a period after Oklahoma City where things seemed to be — at a lower level and ebbed,” Garland said. “But this is the kind of problem you can never take your eyes off of. And — the Justice Department is committed to being sure that we don’t do that.”

Garland visited Oklahoma on his first trip outside of Washington since taking office. During ceremonies at the memorial dedicated to the victims and survivors of the bombing, Garland spoke of his deep connection to the community and those first days after the Alfred P. Murrah Federal Building was destroyed by the truck bomb McVeigh parked on the street below.

“At the time, we did not know how many people had died. But we did know that the children’s (day care) center, which had been at the front of the building, was gone,” Garland said in his speech. “Then and there, we made a vow. We promised that we would find the perpetrators, that we would bring them to justice and that we would do so in a way that honored the Constitution.”

As part of his pilgrimage, Garland visited — for the first time — the northeastern Oklahoma city of Tulsa, where the worst race massacre in U.S. history occurred 100 years ago.

“This is a moment where it’s important to come to a place like this,” Garland told ABC News, as he toured a park dedicated to the history of the massacre and reconciliation. “The kind of devastation that happened here is the product of the same kind of hatred that led to the bombing in Oklahoma City. … They are similar — kind — kinds of devastation brought by terrible hatred. And so I felt I needed to see it, face it.”

The 1921 massacre, committed by an all-white mob, left perhaps as many as 300 dead and about 1,250 homes of Black families burned to the ground.

Garland grew emotional, explaining that he can understand the pain of persecution and hatred as the grandson of people who fled ethnic hatred in what is modern-day Belarus.

“All of us in our family feel an obligation — public service — and try to protect other people the way the country protected us,” Garland said.

Seventy-four years after the devastation, McVeigh, a Gulf War veteran who had been a member of both the militia movement and the KKK, packed tons of explosives into the Ryder truck that would kill 168 on a sun-drenched spring morning.

Garland said he sees “a line through (from Tulsa) to the kind of domestic violent extremism represented by McVeigh.”

The attorney general said he sees the explosion in gun violence and mass shootings across the country as human tragedies that destroy families — just as the Oklahoma City bombing did 26 years ago.

“There is — it might be described as — an epidemic of gun violence in the country,” Garland said. “Not only mass shootings, but individual shootings, of course. And they take a staggering toll not only for the immediate victims, but their families, survivors. You can see in Oklahoma City how every single death affects … the whole community. I have no illusion that the Justice Department, by itself, can solve this problem. But there are some things that the Justice Department can do and we are going to do them.”

A host of regulatory changes are currently being formulated and studied, Garland explained, and his department is “going to create model red-flag laws to make it easier for states that want to craft their own laws” in order to keep guns out of the hands of people with mental health problems.

Importantly, though, the attorney general said people need to remember the human toll every time another shooter opens fire.

“There is a risk of becoming numb,” he said. “Every day or every second or every third day there’s a new report of gun violence. But these are real tragedies for real people. They’re not just statistics that sort of add up. And we have to be careful not to become numb to this. We have to continue to be outraged by these deaths. And we have to continue to hope that — people of goodwill will take the steps necessary to prevent this.”

In the years between serving in the Justice Department and returning as attorney general, Garland was a judge on the U.S. Court of Appeals in Washington. With the modulated caution of the federal judge he was for so long, Garland declined to weigh in on the ongoing investigation into the Jan. 6 insurrection at the Capitol or the case of former Minneapolis police officer Derek Chauvin, now on trial for murder in the death of George Floyd.

But Garland did not attempt to hide how disturbed he has been to see videos emerge repeatedly to show violent police interactions with people of color. Those videos, in fact, helped motivate him to seek the position President Joe Biden nominated him to in January.

“I also saw the videos last summer, all through the summer,” Garland said. “And like many Americans, I was shocked. But many Black Americans were not shocked, because they have known of this kind of treatment before…I felt that beginning last summer, at least, there was a chance to bring this to the fore of the national consciousness, to create a moment in which we could change. And part of the reason that I wanted to be attorney general was I wanted to help bring that change.”

Garland did not sugarcoat the need for police reform or the core of the issue.

“Look, racism is an American problem,” he said. “It’s plain to me that there has been and remains discrimination against African Americans and other communities of color, and other ethnic minorities. I think it’s reflected in discrimination in housing and employment and the justice system. … We do not yet have equal justice under law.”

“This is an important part of the role of the Justice Department, to help bring it about,” he added.

And for the first time, Garland offered a reaction to his nomination to the U.S. Supreme Court in 2016, when Senate Republicans refused to even consider President Barack Obama’s decision to appoint Garland to the seat left vacant by the death of Justice Antonin Scalia.

“Moving on is moving on,” he said.