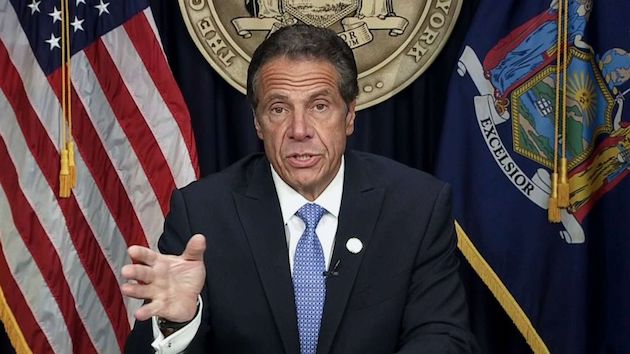 Office of the Governor of New York

(WASHINGTON) — Lawmakers in New York and beyond are applauding the women who came forward to share their stories after Gov. Andrew Cuomo announced Tuesday he was resigning from office following accusations of sexual harassment.

“Make no mistake, this is the result of survivors bravely telling their stories,” New York City Mayor Bill de Blasio said in a statement shortly after Cuomo’s announcement. “It was past time for Andrew Cuomo to resign and it’s for the good of all New York.”

Cuomo’s resignation will be effective in 14 days. It comes on the heels of a bombshell 168-page report released last week by New York State Attorney General Letitia James that found the governor sexually harassed multiple women, including people who worked for him, and in one instance sought to retaliate against a woman leveling accusations against him. Lt. Gov. Kathy Hochul will assume the governor’s seat, becoming the first woman to lead the Empire State.

“Today closes a sad chapter for all of New York, but it’s an important step towards justice,” Attorney General James said in a statement Tuesday reacting to the news. She thanked Cuomo for “his contributions to our state.”

“The ascension of our Lieutenant Governor, Kathy Hochul, will help New York enter a new day,” James added. “We must continue to build on the progress already made and improve the lives of New Yorkers in every corner of the state. I know our state is in good hands with Lieutenant Governor Hochul at the helm, and I look forward to continuing to work with her.”

Both of New York’s senators — Majority Leader Chuck Schumer and Kirsten Gillibrand — welcomed the news and thanked the women who came forward for their courage. The senators were among some of the earliest voices to call for Cuomo’s resignation when allegations first emerged earlier this year.

“First, I want to commend the brave women who stepped forward and courageously told their stories,” Schumer said. “There is no place for sexual harassment, and today’s announcement by Governor Cuomo to resign was the right decision for the good of the people of New York.”

Schumer said he has already spoken to Hochul and has “full confidence” in her taking office.

“First and foremost, I want to thank the incredibly courageous women who came forward and shared their stories,” Gillibrand added in a separate statement. “They are the true public servants here.”

“New York now has a chance to move forward and build a new culture of leadership,” Gillibrand said. “Lt. Gov. Kathy Hochul is an exceptional public servant and will be an excellent governor. I look forward to working together to continue serving the people of our great state.”

Brooklyn Borough President Eric Adams, who won the Democratic primary for New York City mayor, called Cuomo’s move “the right decision [that is] in the best interest of all New Yorkers.” He said he stands ready to work with Hochul.

In a series of tweets, New York assembly member Yuh-Line Niou — who has openly spoken about being a survivor of sexual assault — called for an impeachment investigation to still proceed.

“I believe we can still move forward with impeachment,” the Manhattan assemblywoman, a Democrat, tweeted. In response to another tweet calling for his impeachment, she wrote: “We must.”

“Thank you to all of the survivors who have come forward to tell their stories,” she wrote. “This is what NY needs.”

New York state’s comptroller, Thomas DiNapoli, said in a statement that the governor “has done the right thing” and that his team stands ready to assist Hochul “as we move the state forward.”

Rep. Tom Suozzi, a Democrat representing parts of Queens and Long Island, said in a statement that the governor “has done the right thing by resigning,” but still lauded what he “accomplished” in office.

“There is no doubt that Andrew Cuomo has accomplished much for our state, from the property tax cap, to rebuilding our infrastructure, to instituting a $15 min wage and battling COVID,” Suozzi said. “It is imperative that our next governor continue the positive achievements of the Cuomo administration and help once again make New York the Empire State.”

Meanwhile, in the nation’s capital, White House press secretary Jen Psaki said that President Joe Biden was not given a heads-up on Cuomo’s announcement. She said the president’s views on the matter still stand. Biden lended his voice to calls for Cuomo to resign last week.

“Our view is that this is a story about these courageous women who came forward, told their stories, shared their stories,” Psaki said Tuesday. “The investigation overseen by the attorney general, that of course concluded today in an outcome that the president called for just last week.”