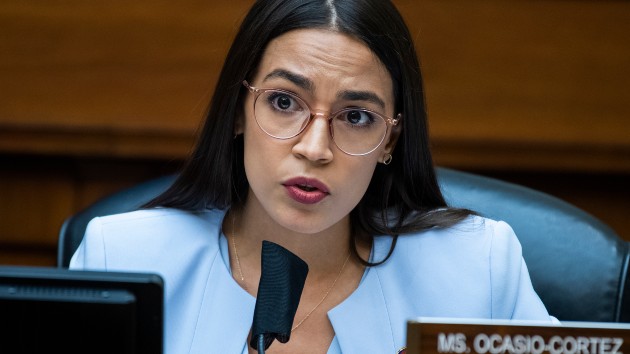 (WASHINGTON) — Rep. Alexandria Ocasio-Cortez, D-N.Y., revealed on Monday night that she is a sexual assault survivor while recounting her experiences during last month’s insurrection at the U.S. Capitol.

“I’m a survivor of sexual assault,” Ocasio-Cortez said, her voice quivering with emotion. “And I haven’t told many people that in my life. But when we go through trauma, trauma compounds on each other.”

In a 90-minute video live-streamed on Instagram that has since garnered over one million views, the 31-year-old congresswoman recalled fearing for her life as she and others were forced to take shelter when a violent mob stormed the Capitol building in Washington, D.C, on Jan. 6. At one point, when she was hiding in the bathroom of her office, she said someone banged on the door and entered the room, repeatedly yelling, “Where is she?”

“This was the moment I thought everything was over,” Ocasio-Cortez said. “I mean, I thought I was going to die.”

“I felt that if this was the journey that my life was taking, that, I felt that things were going to be OK and that, you know, I had fulfiled my purpose,” she said, wiping away tears from her eyes.

She ultimately realized that the man was a Capitol police officer who she said looked at her “with a tremendous amount of anger and hostility.”

Ocasio-Cortez said she feared for her life again later that day when she was barricaded in the office of Rep. Katie Porter, D-Calif.

“The weird thing about moments like these is you lose all sense of time,” she said. “We felt completely unsafe.”

The events occurred on Jan. 6 after President Donald Trump and his allies held a rally earlier that day in Washington, D.C., urging Congress not to certify the results of the November presidential election, in which Trump lost to Democratic candidate Joe Biden. Trump vowed to “never concede” and urged his supporters “to fight,” as he continued to push baseless claims of election fraud.

Crowds of people then made their way to the Capitol steps, pushing through barricades, officers in riot gear and other security measures that were put in place in anticipation of the protest. An angry mob breached the Capitol building, forcing a lockdown with members of Congress holed up inside. It took hours for law enforcement to clear the building and establish a perimeter around the area. Five people, including a police officer, died during the rampage.

Ocasio-Cortez said those who argue it is time to move on from what transpired that day are using “the same tactics of abusers.”

It’s the same tactics, she said, “of that man who touched you inappropriately at work, telling you to move on.”

“Are they going to believe you?” she continued. “Or the adult who, you know, if they hurt you when you were a child and you grow up and you confront them about it, and they try to tell you that what happened never happened.”

Ocasio-Cortez said holding those responsible for what happened on Jan. 6 “is not about the difference of political opinion” or “getting revenge.”

“This is about just, like, basic humanity,” she said. “We are not safe with people who hold positions of power who are willing to endanger the lives of others if they think it will score them a political point.”

She called out Sens. Ted Cruz, R-Texas, and Josh Hawley, R-Miss., who joined Trump in baselessly challenging Biden’s victories in some states.