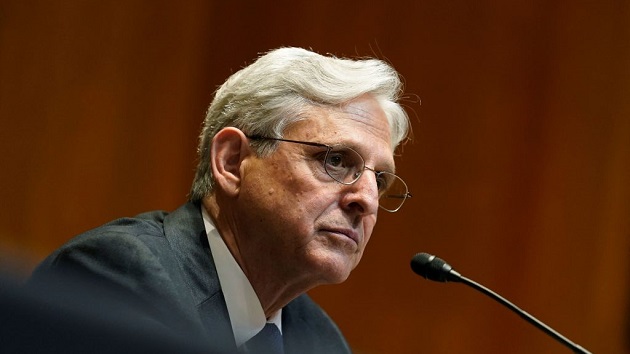 Carroll alleged that Trump raped her in a dressing room at the Bergdorf Goodman department store in the 1990s, which he has denied. She sued him in November 2019 for defamation after he called her a liar, denied meeting her and alleged she made up the claim to sell her new book at the time.

The DOJ argued in a brief Monday that the Federal Tort Claims Act, a law that shields federal employees from individual damages claims, and the Westfall Act, which allows employees to be removed from lawsuits as defendants and replaced by the U.S. government, apply to Trump in the case. Carroll’s lead lawyer, Roberta Kaplan, slammed the move to overturn a district court judge’s ruling as “legally and morally wrong.”

Asked by Sen. Pat Leahey, D-Vt., on Wednesday about criticisms of DOJ for not reversing the position taken by Trump’s DOJ, Garland said the decision was based solely on the law and without any political considerations — but added that he “knows about the criticisms.”

“The job of the Justice Department and making decisions of law is not to back any administration, previous or present,” Garland said. “Our job is to represent the American people. And our job in doing so is to ensure adherence to the rule of law, which is a fundamental requirement of a democracy, or a republic or a representative democracy.”

Garland reasoned that the move was in line with statements he made when first accepting the nomination for attorney general from President Joe Biden, who during the 2020 campaign was publicly critical of the Justice Department moving to substitute itself as Trump’s counsel in the lawsuit.

“Now, it is not always easy to apply that,” Garland added. “Sometimes it means that we have to make a decision about the law that we would never have made and that we strongly disagree with as a matter of policy. But in every case, the job of the Justice Department is to make the best judgment it can as to what the law requires.”

Garland noted that a separation exists between DOJ actions regarding matters of law and matters of policy.

“That explains why we have reversed the policies of the previous administration many times over the last three months and why we have initiated our own policies that are distinctly different than those of the previous administration,” Garland said. “But this is an important issue — the distinction between law and policy, and it’s at the center of ensuring adherence to the rule of law for which the Justice Department stands.”

In the brief filed Monday, the DOJ asked the 2nd U.S. Circuit Court of Appeals in Manhattan to overturn a district court judge who ruled that Trump’s statements about Carroll and her rape claim were not made as part of his official duties.

That October ruling said Trump wasn’t protected because his comments were made outside of his official work.

The DOJ said it did not endorse Trump’s statements about Carroll, calling them “crude” and “disrespectful” but argued that Trump acted “within the scope of his office” in denying the allegation.

The case would be dismissed if the DOJ were to replace Trump.

“It is horrific that Donald Trump raped E. Jean Carroll in a New York City department store many years ago. But it is truly shocking that the current Department of Justice would allow Donald Trump to get away with lying about it, thereby depriving our client of her day in court,” Kaplan told ABC News after learning of the DOJ’s decision.

“The DOJ’s position is not only legally wrong, it is morally wrong since it would give federal officials free license to cover up private sexual misconduct by publicly brutalizing any woman who has the courage to come forward. Calling a woman you sexually assaulted a ‘liar,’ a ‘slut’ or ‘not my type,’ as Donald Trump did here, is not the official act of an American president. We remain confident that Judge Kaplan’s decision will be affirmed by the Second Circuit,” she added.

Kaplan was not immediately available to comment on Garland’s testimony.