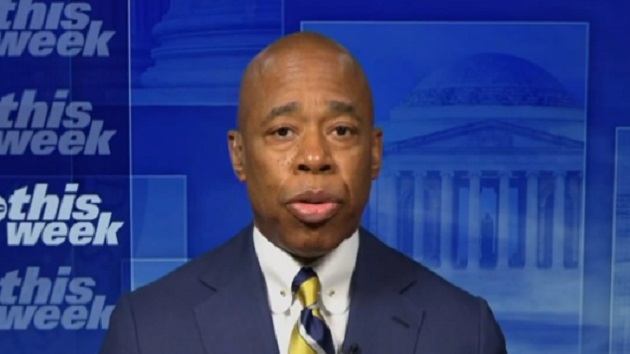 “You know, I say over and over again, there are many rivers that feed the sea of violence. This is a national issue,” Adams said when pressed by Stephanopoulos on the rise in major crimes within New York City this year. “It’s not a red state, blue state. In fact, red states are experiencing a higher murder rate than blue states.”

Frank James, 62, was charged with committing a terrorist act on a mass transportation vehicle after opening fire on a New York subway car Tuesday morning. Ten people were shot, and the shooting launched a 30-hour manhunt for James before he called Crime Stoppers on himself.

New York City Police Commissioner Keechant Sewell told Stephanopoulos during a joint interview with Adams she thought James’ call to the tip line indicated that “we were kind of closing in around him” before he turned himself in.

“We disseminated his picture… we had a number of people looking for him, hundreds of detectives looking for him,” Sewell said. “But I think one of the key factors also is our force multiplier, which are the eyes and ears of our incredible New Yorkers.”

Stephanopoulos said James seemed to be “hiding in plain sight” before the shooting, noting he had been arrested several times and had posted videos to YouTube “packed with hate and suggestions of violence.”

“Do we need a better way to track individuals like this before they take this violent action?” Stephanopoulos asked.

Adams said social media companies “must step up” when it comes to tracking people like James.

“There’s a corporate responsibility when we are watching hate brew online,” Adams said. “We can identify using artificial intelligence and other methods to identify those who are talking about violence.”

Despite last week’s attack and transit crime rising 68% this year compared to 2021, Sewell told Stephanopoulos that crime on the subways in New York City is actually down compared to the pre-COVID numbers. Still, she is trying to make police presence on the subways more visible.

“We recognize that people need to see a visible presence of police in the subway and we’re endeavoring to make sure that that happens,” Sewell said. “There’s also security measures that we don’t see, but we understand that that reassurance is required. And we’re putting multiple officers in the subways every single day.”

Adams, a former NYPD captain who took office on Jan. 1, ran as a tough-on-crime Democrat and has rejected progressive policies around crime and policing, like the “defund the police” movement.

Last week, former New York Police Commissioner Bill Bratton, who served under the Giuliani and de Blasio mayoral administrations, told a Bloomberg podcast, “The scales right now are tipped very heavily in favor of the reforms of the progressive left. Well-intended, some needed, but a bit too far.”

Bratton said the result is rising crime and fear of crime “as evidenced in almost every major American city.”

“Yes, I believe he is right,” Adams responded. “Major mistakes made throughout the years that destroyed the trust that the police commissioner is talking about. We have to rebuild that trust. But we can’t rebuild that trust by allowing those who are dangerous and that have — they have a repeated history of violence to continue to be on our streets.”