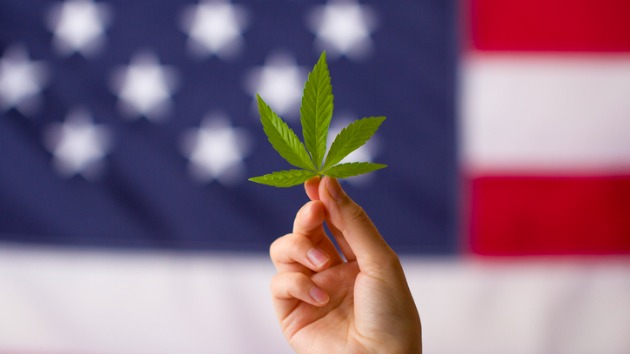 Some marijuana rights advocates told ABC News it’s only a matter of time before the two states join their neighbors, given the millions in extra revenue from marijuana sales and the calls for criminal justice reform from their constituents.

“I think the pressure will be there, being islands of prohibition in the Northeast,” DeVaughn Ward, the senior legislative counsel for the non-profit group the Marijuana Policy Project, told ABC News.

While a vote on a legalization bill in Rhode Island is gaining strength following a passage in its state Senate, advocates on the ground in New Hampshire told ABC News that their state needs extra work.

Still, the marijuana proponents contend, the Connecticut victory greased the wheels in their favor.

Connecticut became the 19th state in the U.S. to legalize recreational marijuana for adults over 21 on Tuesday.

Under Connecticut’s law, which goes into effect July 1, residents over 21 will be able to possess and consume marijuana and state sales are slated to begin next year after the state comes up with its regulation policies. Previous lower-level cannabis records will be expunged as part of the new policy.

Revenue from sales taxes on the substance, expected to be over $100 million annually, will be placed in a “Social Equity and Innovation Fund, which will be used to promote a diverse cannabis industry and reinvest in hard-hit communities,” the Marijuana Policy Project said.

Ward said Connecticut’s law came following years of lobbying and changing views on drug laws by state lawmakers. The successful legalization movements in nearby New Jersey and New York in the last year played the biggest factor, he said.

“You cannot cross state lines with different cannabis laws,” he said. “It would be too complicated and hurt [Connecticut’s] economy.”

Ward said that Connecticut’s passage is what spurred Rhode Island’s legislature to vote on its bill that legalized recreational use. The Rhode Island State Senate passed its version of the bill, which would allow use for adults over 21 and charge a 20% tax, Tuesday night.

Rhode Island’s House of Representatives version of the bill, however, won’t be coming up for a vote before the session ends next week due to a disagreement between lawmakers and Rhode Island Gov. Dan McKee over one technical detail over regulation. The bill currently calls for the creation of an independent Cannabis Control Commission to regulate it, but the governor told reporters Tuesday he wants the state’s Department of Business Regulation to regulate sales.

Nevertheless, Rhode Island House Speaker K. Joseph Shekarchi told ABC News in a statement that it’s possible the House could hold a special session in the summer or fall to address the bill.

“We will take our time and make sure all proposals are carefully vetted and are in the best interest of the State of Rhode Island,” he said in a statement.

Despite the governor’s comments, Ward predicted a “domino effect” brought on by the border states’ successes in regulated cannabis will take place this year.

When it comes to New Hampshire, local marijuana legalization advocates contended the conservative state legislature and Gov. Chris Sununu’s vocal opposition to legalization will make it harder to join their neighbors.

“Connecticut doesn’t do enough for New Hampshire because we have one person holding it back,” Daryl Eames, the founder of the New Hampshire Cannabis Association, an advocacy group, told ABC News.

Eames said an attempt to pass legislation for recreational marijuana in 2019 couldn’t get past a veto-proof majority in the state Senate. Arguments over the lost tax revenue and, more importantly, loss business to neighboring states haven’t been enough to sway the more conservative members of the government, Eames contended.

“It’s just something that’s not in their short-term plans,” he said.

The political roadblocks are not discouraging Eames and state leaders who support legalization. He noted that more legislators on both sides of the aisle have formed cannabis caucuses and are mustering support for legalization efforts.

“New Hampshire prides itself with independent thought and touts a state motto of Live Free or Die. Legal access to adult use cannabis grown and marketed in New Hampshire without extensive government oversight is more than a right to create small businesses, it’s seeing personal cultivation and possession as a civil right,” he said in a statement.

Eames predicted that if other states across the country continue to legalize marijuana and, most importantly, if the federal government begins discussion to reschedule the substance, the governor and state house will have no choice but to reconsider.

“It does feel bad that we could be the only state in the region to not offer it, but it’s probably going to be more of a question of when than if,” he said.