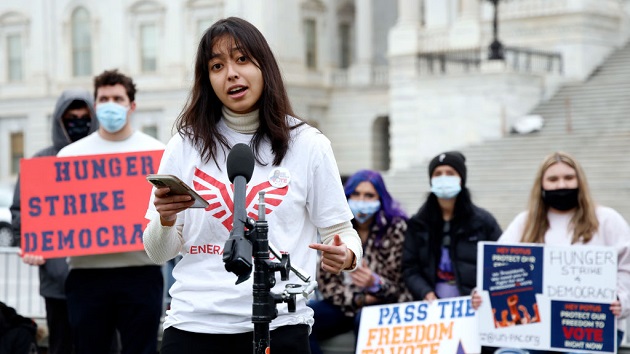 (WASHINGTON) — Advocates are taking action across the country as they hope to pressure members of Congress to pass voting rights legislation by Martin Luther King Jr. Day.

One of the actions being taken right now is a hunger strike by individuals in different parts of the U.S. as a form of protest to get the legislation passed.

Rev. Stephen A. Green, chair of Faith for Black Lives, organized a hunger strike that included him and 24 other faith leaders from across the country prompted by Senate Majority Leader Chuck Schumer’s “Dear collogues” letter released in early January.

“From Jan. 3, we noticed that there was a deadline or a date was identified for voting on or before Jan. 17,” said Green. “And so, we decided to engage in this hunger strike to continue to apply pressure on the Senate to get it done on or before Jan. 17.”

Green and the other faith leaders began their hunger strike on Jan. 6.

Un-PAC, a nonpartisan organization with a current mission is to get The Freedom to Vote Act passed, has restarted its hunger strike from last month and currently has members and allies protesting outside the U.S. Capitol.

“This is a last-minute push and a desperate plea because if this bill does not pass, by Martin Luther King Jr. Day or the end of January, it will be too late to implement many of the major facets of the bill [for the 2022 midterms],” said Callynn Johnson, a member of Un-PAC.

Last month, Un-PAC went on a hunger strike for just over two weeks outside the White House to push for voting rights legislation. The organization has more people joining them on their strike, including the faith leaders.

Another major event to support voting legislation will happen in Phoenix on Saturday, where there will be a voting rights mobilization.

“We will march over the 16th Street overpass here in Phoenix and march back to Eastlake Park,” said Dr. Jannah Scott, a liaison and member of the leadership council with the African American Christian Clergy Coalition of Arizona. “Then, at the park part, we will have a program of speakers, of music, of people just coming together and giving their exhortation about why this is so important and about calling in Congress and the president to do what they need to do at this critical time in our history.”

Eastlake Park has been a focal point for African American history. The park has traditionally been used for the annual Martin Luther King Jr. birthday celebration. The park has also held civil rights rallies, civil rights leaders’ visits and is the starting point of all civil rights marches to the state Capitol.

Over the past year, the Arizona state legislature has passed state laws restricting voting access.

Arizona is also the home of Democratic Sen. Kyrsten Sinema, D-Ariz., one of two key Democrats needed to end the filibuster and create a pathway for voting legislation. However, on Thursday, Sinema made it clear during her speech on the Senate floor that she does not intend to do that.

All these events lead up to Martin Luther King Jr. Day on Monday when over a 100 national and grassroots organizations will gather in Washington, D.C., for a march that will start at Potomac Avenue and end at Frederick Douglass Memorial Bridge. A press conference will follow where Martin Luther King III, Arndrea Waters King and other voting rights leaders and community organizers will speak on the urgency to pass voting legislation.

Even after discussions with President Joe Biden and other Democratic colleagues, Sinema and Sen. Joe Manchin, D-W.Va., are still not agreeing to end the filibuster. Without their votes, there is seemingly no pathway for voting legislation to pass before or on Martin Luther King Jr. Day, but that is not stopping protesters and voting rights advocates from taking action.

“We will escalate our mobilization if our demands are not met to have legislation passed by [Martin Luther King Jr. Day],” said Green.

“We will continue the calling for [voting rights],” said Scott. “We will not rest until this gets done.”