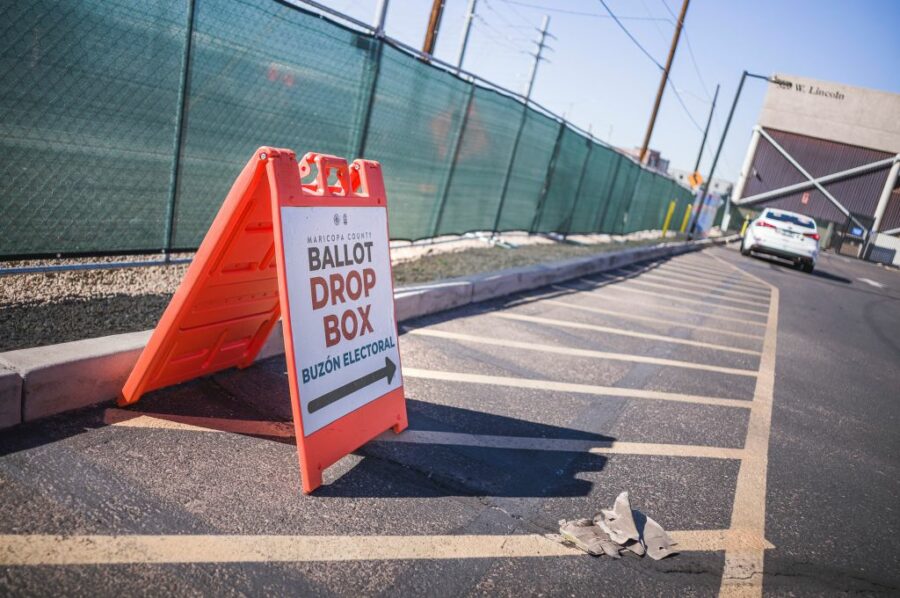 (WASHINGTON) — Six cases of alleged voter intimidation at drop box locations in Arizona have been referred to the Justice Department in Washington, Secretary of State Katie Hobbs said Monday, as early voting options have been open for nearly two weeks across the state.

“Voter harassment may include gathering around ballot drop boxes questioning voters, brandishing weapons, taking pictures of people voting and following or chasing voters who are attempting to drop off their ballots, and it can all be considered voter intimidation. It is unacceptable,” Hobbs said in a release. “I will continue to forward reports received to law enforcement, and I urge law enforcement to take action to protect voters from ongoing intimidation.”

Attorney General Merrick Garland, asked on Monday about voter intimidation at Arizona ballot drop boxes, said, “The Justice Department has an obligation to guarantee a free and fair vote by everyone whose qualified to vote and will not permit voters to be intimidated.”

Five recorded complaints obtained by ABC News occurred between Oct. 17 and Oct. 22, outside ballot drop boxes at 501 S. 3rd Ave. in Phoenix and at the Mesa Juvenile Court, both in Maricopa County. Most described an instance of groups of individuals loitering near the drop boxes, filming and photographing voters as they returned their ballots and in some cases, taking photographs of the voters’ license plates. One report described individuals dressed in “camo-clad gear” and photos from election officials show at least two armed individuals outside the Mesa drop box Friday.

One incident report, filed on Oct. 20 at 12:30 p.m. at Mesa Juvenile Court detailed how a couple in their 70s, who parked their car in order to individually put their ballots in the drop box, said they were approached by a group of five or six men in the parking lot.

“As we were getting up to our car, two individuals took pictures of our license plate and our car. I got out and asked what they were doing. They claimed they were taking pictures for “election security” and I took pictures of them to report them to the DOJ for voter intimation and harassment. As we were pulling out, they continued to film my wife, myself and our car,” the complaint said.

Early voting in the 2022 midterm elections began Oct. 12 in Arizona, where 402,000 early ballots have been returned so far, according to data compiled by the secretary of state from 15 county recorders. Aside from voters and credentialed government or party officials, individuals must stay at least 75 feet away from secure drop box locations, according to Arizona law.

“There’s a group of people hanging out near the ballot dropbox filming and photographing my wife and I as we approached the dropbox and accusing us of being a mile (mule),” another incident report, filed on Oct. 17 at 6:40 p.m. at Mesa Juvenile Court said. “They took photographs of our license plate and of us and then followed us out the parking lot in one of their cars continuing to film.”

Accusations of being “mules” is in reference to a widely debunked, far-right film, ‘2,000 Mules,’ which falsely alleges that individuals hired by Democrats stuffed numerous drop boxes with potentially fake absentee ballots during the 2020 election.

Hobbs’ office in its release on Monday also referred at least one report of election worker harassment to law enforcement over the weekend after she and two other employees were sent a menacing and vulgar message: “Remember the French Revolution of 1799??….” it said.

Maricopa County Sheriff Paul Penzone told reporters on Monday his office also is working with the DOJ to identify which cases qualify as voter intimidation. Since voting began, he said his team has written two criminal reports and submitted those to the county prosecutor.

“I think it’s undermining who we are as a nation, and I think that it’s self-serving in many ways. And what do I see now as the sheriff of one of the biggest counties in the nation, I see that every day I’m dedicating a considerable amount of resources, just to give people confidence that they can cast a vote safely and that is absurd,” he said.

“The more folks that are creating problems, the more deputies that you’re gonna see on the streets focused on this versus burglaries and crimes against children and robberies and all the stuff we shouldn’t be doing. But we’ll come and we’ll babysit polling sites because people have to misbehave, if that’s what we have to do to protect democracy,” he added.

Last week, some individuals set up camp there and told ABC News affiliate KNXV they were out at a drop box in Mesa to “catch some Vitamin D” and with “Clean Elections USA” — a group that calls individuals to monitor drop box locations.

“We are looking for true Patriots to take a stand and watch the drop boxes. We want to gather video (and live witness evidence) of any ballot tampering that takes place in real time,” their website reads.

Non-profit groups Arizona Alliance for Retired Americans and Voto Latino filed a lawsuit Monday seeking a restraining order against Clean Elections USA and the individuals they said have been gathering at and surveilling drop boxes in Arizona.

Maricopa County Board of Supervisors Chairman Bill Gates and Maricopa County Recorder Stephen Richer, who have faced death threats of their own as election workers, condemned the drop box watchers in a joint statement on Saturday.

“We are deeply concerned about the safety of individuals who are exercising their constitutional right to vote and who are lawfully taking their early ballot to a drop box. Uninformed vigilantes outside Maricopa County’s drop boxes are not increasing election integrity. Instead, they are leading to voter intimidation complaints. Although monitoring and transparency in our elections is critical, voter intimidation is unlawful.”

Kelly Townsend, a Republican and state senator, tweeted Monday, “I should not have to say this but wearing tactical gear while watching a ballot drop box could be considered voter intimidation. Don’t do it.”