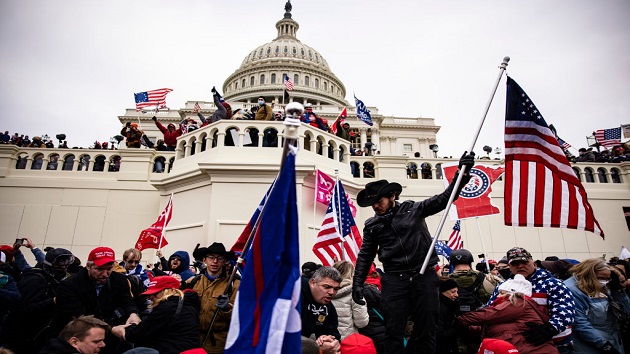 (WASHINGTON) — More than 465 people have been arrested across nearly all 50 states in connection with the Jan. 6 attack on the U.S. Capitol, the Justice Department announced in a statement marking Saturday as 150 days since the insurrection.

A fact sheet released by the DOJ on Friday helps to illustrate what officials have described as likely the largest criminal investigation in DOJ’s history, which continues to sweep up more suspects.

And investigators are continuing to search and seek tips on some of the most violent actors from that day. The department says it is still seeking tips to identify more than 250 individuals involved in assaults on officers or other acts of violence. So far, citizens around the country have provided more than 200,000 digital media tips to the FBI to assist in its investigations, according to the DOJ.

On Jan. 6, a rally in support of President Donald Trump turned deadly after Trump encouraged his supporters to march to Capitol Hill, where Congress was meeting to certify Joe Biden as the 46th president of the United States.

Of those charged so far, more than 130 have been charged with assaulting or impeding law enforcement trying to protect the Capitol, including more than 40 charged with using a deadly or dangerous weapon against officers. Nearly everyone who has been arraigned so far has pleaded not guilty, with many of those who illegally entered the building saying they were following Trump’s instructions at the rally to march to the Capitol or didn’t believe they were violating the law because they were following hundreds of others and meeting no resistance from police.

Two — including a self-proclaimed member of the Oath Keepers militia — have so far have pleaded guilty, and prosecutors in a growing number of cases have said they are engaged in active plea discussions with defendants.

In a court hearing Friday afternoon, prosecutors read a letter from one Capitol Police officer who suffered a concussion after being pushed to the ground during the riot. The officer pleaded for a judge to keep the defendant accused of pushing her, Ryan Samsel, behind bars pending trial. Lawyers for Samsel disputed his actions made him a threat to the community.

“You have stolen moments away from me that I cannot get back,” the officer wrote in her letter, noting she suffered brain damage and “psychological trauma” as a result of the injury.

The officer is just one among roughly 140 who were assaulted during the insurrection, the DOJ says, including 80 from the Capitol Police and 60 from D.C.’s Metropolitan Police Department.

Prosecutors have also charged roughly 30 defendants with conspiracy, either with the aim of thwarting Congress’ duty of certifying the presidential election, obstructing law enforcement, injuring officers or a combination of the three, according to the DOJ.

The largest conspiracy case out of the riot against members of the Oath Keepers militia group was expanded by four defendants earlier this week, bringing the total charged to 16 defendants so far.

Prosecutors have charged members of the group with beginning to conspire as early as Election Day — Nov. 3, 2020 — to disrupt the certification of President Joe Biden’s victory, using social platforms to recruit others to join them and traveling to D.C. equipped with military gear and firearms that were left close by as part of a ‘Quick Reaction Force’ that could be mobilized in the event violence erupted or former President Donald Trump invoked the Insurrection Act.

Capitol Police will be conducting training on the Capitol Grounds on Monday and have had several off-campus trainings in recent weeks.

Late last month, Republicans blocked the Senate from moving forward on a bill that would establish a bipartisan, independent commission to investigate the Jan. 6 assault.