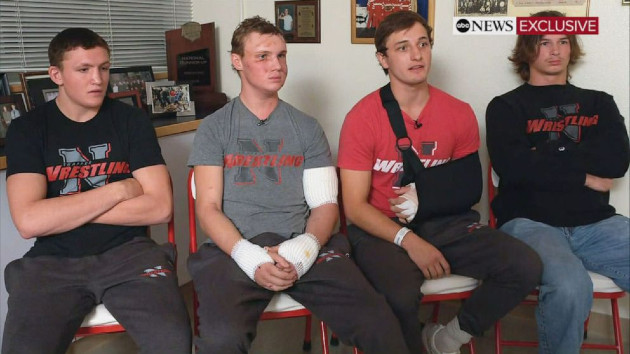 (NEW YORK) — Four college wrestlers say they are grateful to be alive — and for each other — after going toe-to-toe with a grizzly bear in Wyoming over the weekend.

Brayden Lowry, Kendell Cummings, August Harrison and Orrin Jackson, all students and wrestling teammates at Northwest College in Powell, Wyoming, said they were searching for fallen antlers in Shoshone National Forest on Saturday when suddenly Lowry and Cummings came across a grizzly bear. The animal attacked, tackling Lowry first.

“The bear came running out of the trees. I didn’t even see it until it was right in front of me, but I heard the crashing,” Lowry told ABC News in an exclusive interview that aired Wednesday on Good Morning America.

“The only thing I could yell is: ‘Bear! Bear!"” he recalled. “I just knew I had to protect my head and just kind of fight for life, you know — it’s life or death.”

Cummings tried to help his teammate by yelling at, grabbing and punching the bear — until the animal turned on him.

“It knocked me onto the ground and then, with its head, pushed me on the ground all the way up against the trees and then kind of pinned me up there and it was attacking me,” Cummings told ABC News. “I was putting my hands in its mouth and stuff, so it wouldn’t be chewing on my neck and everything.”

The bear finally walked away, only to return a short time later as Cummings called out to his injured teammate.

“I heard the bear kind of grunting behind me and I heard it walking,” Cummings recalled. “Then I saw it again and it came and attacked me again.”

Eventually Cummings and Lowry were able to escape, reunite with their other teammates and call 911.

“I spoke with lady on the phone — the dispatch lady — and we kind of coordinated a plan to get the Flight for Life there,” Jackson told ABC News. “I remember telling her: ‘That’s our brother up there."”

The Wyoming Game and Fish Department said in a statement on Monday that it “is in the process of gathering further details; the investigation into the incident is ongoing.”

“Based on the initial information, this appears to be a sudden, surprise encounter with a grizzly bear,” the agency added. “In the last few weeks, there has been an abundance of bear activity at low elevations throughout the South Fork and North Fork of the Shoshone River, Clarks Fork River and Greybull River drainages. Game and Fish encourages anyone recreating in these areas to use caution and be bear aware.”

Cummings was airlifted to Billings Clinic in Cody, Wyoming, where he received 60 staples in his head. Lowry was taken to the same hospital via ambulance and was treated for a compound fracture in his left arm.

“For us to walk out of there alive, all four of us, it’s a miracle. It really is,” Lowry said.