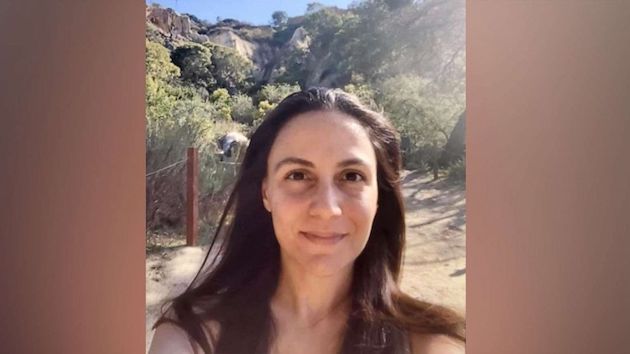 (LOS ANGELES) — A Southern California woman who never returned from a hike last weekend has been found dead, authorities said.

Narineh Avakian, 37, of Glendale, California, was found dead Saturday at about 1:30 p.m. after nearly a week of searching by authorities.

Avakian told family she was going on a one-day hike around noon Sunday, the Glendale Police Department said in a statement Friday.

When Avakian didn’t come back, her family reported her missing on Monday.

Avakian often went on solo trips, the family told police, and they didn’t know where she planned to hike that day.

Her car was found Thursday afternoon parked at the Buckhorn Day Use Area along Angeles Crest Highway, authorities said. The area is located in Angeles National Forest at 6,700-foot elevation.

“It should be noted that this area was heavily impacted by the recent snowstorm,” police said in a statement Friday.

Avakian’s car was towed for further processing at the Glendale station, and a search-and-rescue crew from the Los Angeles County Sheriff’s Department was immediately deployed alongside volunteers.

“Based on preliminary investigation, it does not appear that foul play was involved with her death. An investigation into Narineh Avakian’s cause of death is ongoing,” police said Saturday.

The search effort was suspended around 2 a.m. local time Friday, after about a foot of snow fell overnight, before resuming several hours later, police said.

The search was active as of Friday afternoon with a “large contingent” of search-and-rescue teams, said police. Authorities “highly discouraged” members of the public from conducting their own search efforts.

Her body was found by the Los Angeles County Sheriff’s Department’s Search and Rescue Team as well as a number of assisting counties after efforts picked back up Saturday.