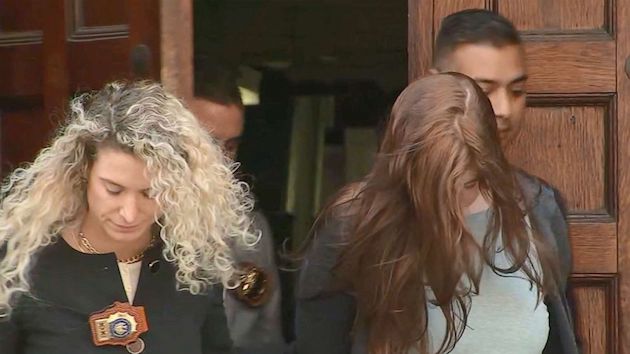 (NEW YORK) — A 26-year-old woman arrested this week in the fatal shoving attack of an 87-year-old woman earlier this month on a New York City street has made bail, her attorney said Friday.

Lauren Pazienza, of Port Jefferson, New York, was charged Tuesday with manslaughter in connection to the March 10 incident, police said.

Pazienza turned herself in to the 10th Precinct in Manhattan’s Chelsea neighborhood, ABC station WABC reported. She was seen being escorted out of the 10th Precinct with her hair covering her face and did not respond to any questions from reporters about the charge.

Pazienza was arraigned Tuesday in New York Criminal Court on manslaughter and assault charges. A judge set her bail at $500,000 cash or $1 million bond.

Her parents have since posted bail and her attorney, Arthur Aidala, expects her to be released from Rikers Island at some point Friday, he told reporters.

Pazienza’s return court appearance, initially scheduled for Friday, was adjourned until April 25 pending the arraignment on her expected indictment.

“We look forward to getting the evidence and the discovery material from the attorney’s office so my client will now be able to come to our office and discuss the case with her partners and I to determine what the next steps are,” Aidala said.

The attorney called the victim’s death a “tragedy.”

“We’re just going to get to the bottom of what really happened that day after we have all the evidence that’s in possession of the prosecutors because we don’t have any evidence,” Aidala said.

The victim was walking in Chelsea on the night of March 10 when the assailant approached her from behind and pushed her, “causing her to fall and hit her head,” the New York City Police Department said following the incident. She was transported to an area hospital in critical condition. She had suffered a traumatic head injury, her family said.

The victim, who officials identified as Barbara Maier Gustern, died from her injuries on March 15, police said.

The NYPD released surveillance video of the suspect walking along a sidewalk as it called on the public for help in solving what police said appeared to be an unprovoked attack.

“We’re asking the public’s help in solving this disgusting, disgraceful offense committed against a vulnerable, elderly female who was doing nothing but walking down the streets of New York City,” NYPD Chief of Detectives James Essig said during a briefing last week.

A motive in the attack remains unclear.

Gustern was a well-known and beloved member of the city’s cabaret scene and a vocal coach. Condolences from the theater community have poured in in the wake of her sudden passing.

“We are waiting for the legal process to run its course and look forward to a resolution of the matter,” her grandson, AJ Gustern, said in a statement to ABC News. “While we appreciate the outpouring of affection for my grandmother, the family is still grieving. We ask for respect for our privacy during this difficult time.”