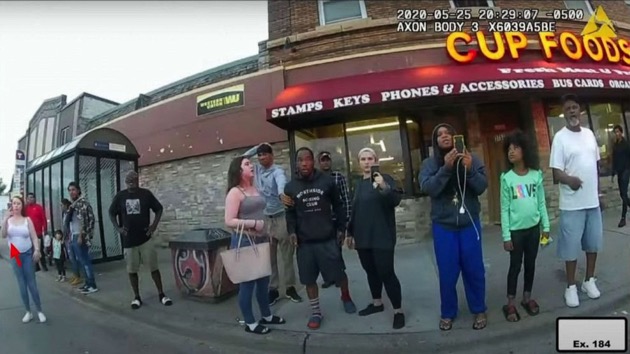 (MINNEAPOLIS) — One needed an auxiliary cable for her cellphone. Another was walking her 9-year-old cousin to the corner store to buy snacks. An off-duty firefighter was strolling home from a serenity garden, and another man, who described himself as “nosey,” was driving around his neighborhood and pulled over when he saw police detaining a Black man.

On the warm spring evening of May 25, 2020, they and others converged just after 8 p.m. outside the Cup Foods store on the corner of Chicago Avenue and East 38th Street in south Minneapolis, witnessing what prosecutors have described as the torturous murder of George Floyd at the hands of police officers.

Witness after witness testified this week at the trial of one of those now-former officers, Derek Chauvin, and told a jury, at times through tears and even sobs, what they saw in excruciating detail. Several provided commentary to cellphone videos they took of Floyd dying.

Charles McMillian, 61, was in his 2006 Dodge Caravan and stopped at a red light in front of Cup Foods, planning to turn east on East 38th Street when his attention turned to an encounter between police and a Black man sitting in a blue Mercedes Benz SUV.

McMillian, who lives in the neighborhood, said he stopped because he was being “nosy.”

He said he got out of his van and watched the interaction — only later he’d learn that it was 46-year-old George Floyd.

“Basically, I [saw] the officer asking Mr. Floyd to get out of the truck,” McMillian recalled.

After briefly allowing Floyd, who had been placed in handcuffs, to sit on the sidewalk, two officers McMillian later learned were Thomas Lane and Alexander Kueng, had Floyd stand up as they walked him across the street to a police car parked outside Cup Foods.

As the officers attempted to place Floyd in the police car, McMillian said Floyd appeared to struggle and collapse in the back seat and told the officers he was “claustrophobic.” McMillian said he began speaking to Floyd from a distance. It turned out to be the last full conversation Floyd would have with another human being.

“I was telling Mr. Floyd, ‘Just comply with them. Get on in the car because you can’t win,"” McMillian said.

As the officers struggled with Floyd, two more now-former officers, Chauvin and Tou Thao, arrived on the scene. McMillian said he recognized Chauvin from an encounter the previous week when he said he told the officer, “At the end of the day, you go home to your family safe.”

He said the officers forced Floyd into the back of the squad car on the driver’s side and struggled with him, eventually removing him through the rear passenger-side door. Floyd, still handcuffed, was placed prone on the ground. McMillian said he saw Chauvin putting his knee on the back of Floyd’s neck as Lane and Kueng helped hold him down.

As his face was being pressed against the pavement, Floyd, according to McMillian, repeatedly cried out “momma.”

“I feel helpless,” said McMillian, who broke down sobbing.

Out to buy snacks

Darnella Frazier, now an 18-year-old high school student, was walking to Cup Foods with her 9-year-old cousin, Judea Reynolds, from their home a few blocks away to buy some snacks. As they approached the store, Frazier ushered her cousin inside then circled back to investigate something that caught her eye — police officers holding down a Black man next to a police car.

Frazier said she immediately began recording the incident with her cellphone.

“He was in pain,” Frazier said of Floyd. “It seemed like, he knew … he knew it was over for him. He was terrified. He was suffering. This was a cry for help.”

Other witnesses began to gather. Frazier’s cousin, Judea, emerged from the store, and as Frazier recorded the event, the little girl, wearing a green shirt with the word Love written on the front of it, stood by her, watching in disbelief.

The youngest witness, so far, called to testify against Chauvin, Judea said, “I was sad and kind of mad cause I felt like he was stopping him from breathing.”

Frazier testified that the crowd of bystanders grew larger and that Thao was keeping people at bay as Floyd continued to beg for his life.

She said that after an ambulance arrived, Chauvin still refused to remove his knee from Floyd’s neck, even though Floyd no longer appeared to be conscious.

“The paramedic … he did a motion like ‘Get up,’ basically telling [Chauvin] to move his knee. His knee was still there, even when they came,” she said.

Professional MMA fighter Donald Williams II, 33, said he was just going to Cup Foods that day to get a drink and clear his head.

He testified that when he got to the front of the store, Floyd was still pleading for his life under the weight of Chauvin’s knee on his neck. He said he immediately recognized the position Chauvin had Floyd in as a “blood choke,” a technique he has used in the ring to render an opponent unconscious by cutting the flow of blood to the head.

Williams testified that at one point, he locked eyes with Chauvin.

“He looked at me. It was the only time he looked at me, when I said it was a blood choke,” Williams testified.

Williams said that after Floyd’s apparently lifeless body was taken away in an ambulance, he called 911 “because I believed I witnessed a murder.”

‘Wasn’t anything I could do’

Alyssa Funari, an 18-year-old 12th grader, testified that she and a friend drove her grandfather’s Buick to Cup Foods on May 25 to pick up an auxiliary cable for her phone. But before she could get to the door, she heard the sound of bystanders yelling at police.

She said she could also hear Floyd.

“He said he couldn’t breathe and that his stomach hurt and that he wanted his mom,” Funari said. “I knew initially that there was something wrong, so I started recording.”

“He looked like he was fighting to breathe. At first, he was vocal, and then he got less vocal,” she added. “You could see in his face that he was slowly not being able to breathe. His eyes were rolling back and at one point he just kind of sat there, or laid there.”

She also began to break down in tears as she said, “It was difficult because I felt like there really wasn’t anything I could do as a bystander.”

In her testimony, 17-year-old Kaylynn Gilbert, the friend who accompanied Funari to the store, testified that she saw none of the police officers attempt to check to see if Floyd had a pulse or move to get off of him. As she grew more concerned, she joined other bystanders in yelling at the officers.

She described Floyd’s condition once paramedics arrived and told the officers to get off of him.

“He looked kinda like purple, like he wasn’t getting enough circulation. He was really limp,” Gilbert said. “I didn’t know for sure if George Floyd was dead until after the fact, but I had a gut feeling.”

Walk from a serenity garden

By the time off-duty Minneapolis firefighter Genevieve Hansen, 28, happened upon the scene, she said Floyd was unconscious but Chauvin’s knee remained on his neck.

Dressed in civilian clothes, Hansen, on her way back from a serenity garden, said she identified herself to the officers and asked if they’d checked Floyd for a pulse.

“I was concerned to see a handcuffed man who was not moving, with officers with their whole body weight on his back and a crowd that was stressed out,” Hansen testified.

Instead of being allowed to examine Floyd, she said Thao ordered her to get on the sidewalk and told her, “If you’re really a Minneapolis firefighter, you know better than to get involved.”