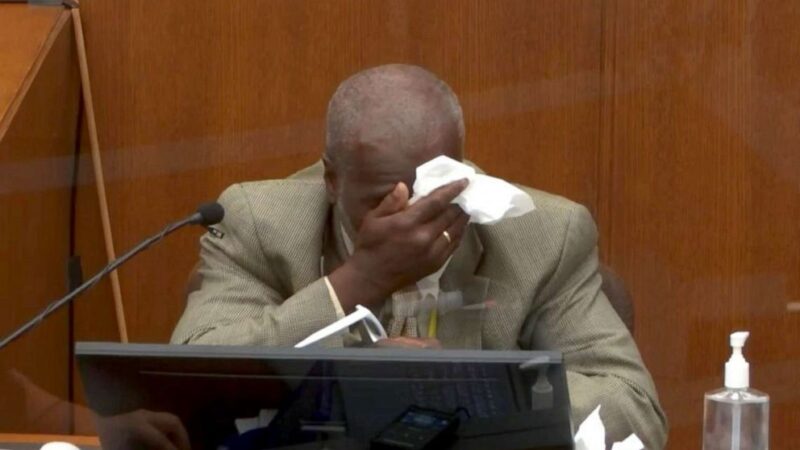 (MINNEAPOLIS) — A man who witnessed George Floyd’s arrest broke down on the stand as he watched composite footage from the encounter.

Charles McMillian, who lives near the Cup Foods, was driving by when he saw Floyd’s encounter with police, he said. McMillian can be heard talking to Floyd in the viral video taken by a bystander, telling him, “You can’t win, man.”

Prosecutor Erin Eldridge played new video in the courtroom — a composite of surveillance footage taken by a camera at Cup Foods and former Minneapolis Police officer Derek Chauvin’s body camera that showed McMillian confront former Chauvin after Floyd was taken away in the ambulance.

As McMillian watched the footage, he became emotional, bowing his head as he sobbed and wiped his eyes.

A witness breaks down in tears after watching video of George Floyd's arrest during the Derek Chauvin trial. https://t.co/LGeLbXi96N pic.twitter.com/wwU2J0QJeW

At one point, Eldridger asked McMillian if he needed “a minute,” and paused the video. McMillian continued to cry for several seconds before Eldridge offered him water.

As McMillian cried, Chauvin and his defense attorney, Eric Nelson, could be seen writing down notes.

When Eldridge asked McMillian to explain how he was feeling in that moment, he replied, “I feel helpless.” Hennepin County Judge Peter Cahill then called for a 10-minute break.

McMillian later testified that a few days prior to May 25, 2020, the day Floyd died, he encountered Chauvin, telling him that at the end of the day he goes home safe to his family and should let the other person do the same.

The composite video shows McMillian approaching Chauvin as he got back in his squad car after Floyd was taken away. McMillian can be heard reminding Chauvin of their conversation in the days prior.

Chauvin then responds to McMillian by describing Floyd as a “sizeable guy” and that the officers needed to “control” Floyd. Chauvin also mentioned that Floyd was “probably on something.”

The defense declined to cross-examine McMillian.