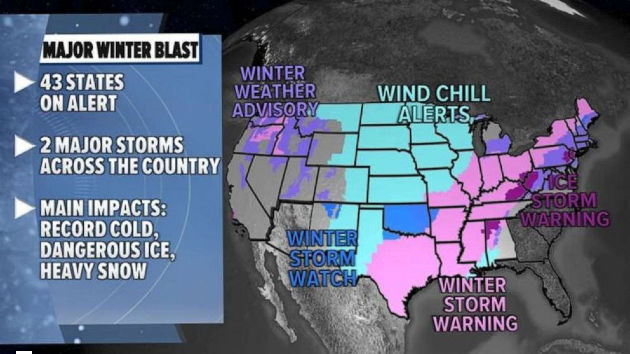 (NEW YORK) — A man has died in Louisiana after slipping on ice caused by a blast of cold that has not been seen in parts of the South in decades.

The 50-year-old man hit his head on this ice, according to the Lafayette Parish Coroner’s Office, which confirmed that the death was storm-related.

A tornado watch is also affecting parts of the South from southern Georgia to north Florida. The threat for a few tornadoes, damaging wind gusts and large hail will continue through Monday evening and has already damaged some homes in Damascus, Georgia, according to local authorities.

Two storms are moving across the country along with the historic cold front.

The first storm brought record-breaking snowfall this weekend for Seattle, Portland and into Oklahoma and Texas, along with the most snow in Seattle since 1969.

In Texas and Oklahoma, 6 to 11 inches of snow fell from San Angelo to Oklahoma City, where the snow paralyzed the region.

In Oklahoma City, the temperatures remained below 20 degrees for more than seven days, comparable only to the cold outbreak in 1905 and in the late 1800s, according to the National Weather Service.

More than 200 million residents in 43 states were on alert for snow, ice and bitter cold on Monday. The cold will remain in the South through Tuesday night, with wind chills expected to be down to -12 in Shreveport, Louisiana, and -1 in Houston.

The storm that brought all the snow and ice to Seattle, Portland, Oklahoma City and Dallas will move into the Ohio Valley Monday and into the Northeast through the night with ice and snow. More than 4.3 million people, the majority in Texas, were without power as of Monday afternoon.

An ice storm warning has been issued for Pennsylvania, New Jersey and New York, where half an inch of ice accretion is possible.

A winter storm warning has also been issued for Chicago, St. Louis, Cleveland, Cincinnati and Nashville, where some areas could see more than a half a foot of snow.

A second storm is expected to move into the South by Wednesday, with more ice and snow for Texas, Oklahoma, Arkansas and Tennessee.

The Southwest Power Pool ordered the start of controlled rolling cutoffs in 14 states Monday afternoon. The power property manages an electric grid that links utilities in all of Oklahoma and Kansas and parts of Texas, Louisiana, Arkansas, Missouri, Iowa, Minnesota, North and South Dakota, Montana, Wyoming, Nebraska and New Mexico.

The second storm moves into the Northeast by Thursday with snow changing to rain from Washington, D.C. to Boston and all snow for the inland Northeast from Pennsylvania to Maine.

With these two storms affecting most of the lower 48 states, a lot of ice and snow is expected to fall this week from Washington to Texas and up to Maine.

The heaviest snow from these two storms will be in western New York state and into the mountains of Vermont, New Hampshire and Maine, where more than a foot can accumulate.

Heavy snow is also expected in the Cascades and northern Rockies.

There will be historic record-breaking cold on Monday night that will occur from the Plains down to Texas and into Alabama, where these temperatures have not been seen for decades.

Here are the wind chills for Tuesday morning across the country.