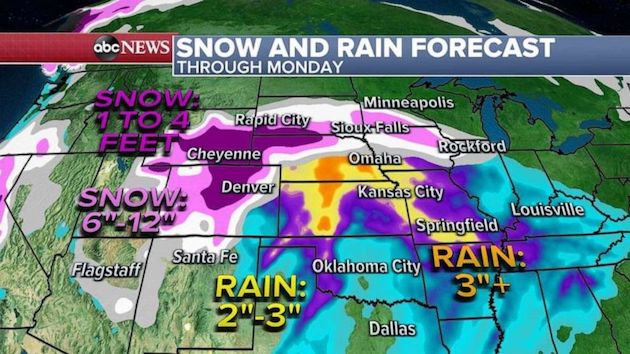 (NEW YORK) — A major storm is targeting the central U.S. this weekend, with near blizzard conditions forecast across the Rockies and High Plains. Severe weather, including the possibility of strong tornadoes across the central and southern Plains, is also expected.

The storm has already brought three reported tornadoes to Texas and over 3 inches of rain to parts of Missouri. Over a foot of snow fell in Flagstaff, Arizona, as well.

The heavy snow will move into Denver Saturday morning. Additionally, over 1.5 inches of rain per hour is possible Saturday across parts of northeastern Oklahoma and into southern Missouri.

As the snow ramps up in intensity in Colorado, winds will also increase. At times near white-out conditions will be possible, and winds could gust as high as 35 MPH. Conditions will be extremely dangerous going into Saturday night across Colorado and Wyoming.

In the southern plains, there is an enhanced risk for severe storms, including the possibility of strong tornadoes across the Texas panhandle and Oklahoma. Damaging winds and hail will also be a threat in storms in this region. The storms will fire Saturday afternoon, reaching peak intensity during the evening hours.

By Sunday morning, the heavy rain will spread across much of the plains, while Denver and Cheyenne, Wyoming, will remain in heavy snow.

The storm will try to move east by Sunday night, with heavy torrential rain moving into parts of Arkansas and Missouri again. Meanwhile, heavy snow will spread across parts of the northern plains and head towards the upper Midwest.

The good news is that as the storm reaches the eastern U.S. on Monday, it begins to lose its strength and doesn’t seem to pose a significant threat to the East Coast.

Locally 2 to 4 feet of snow will be possible in parts of Colorado and Wyoming. Denver itself could see at least 1 to 2 feet of snow through the weekend, possibly higher.

Denver’s top snowstorm in history was 45.7 inches in December 1913. If Denver picks up 2 feet of snow, it will be the fourth biggest snowstorm on record, and the most snow for the city since 2003, when the city picked up 31.8 inches of snow.

Meanwhile, over 3 additional inches of rain are possible across parts of the central plains, which could cause flash flooding.

The weather pattern will continue with another storm arriving on the West Coast by Sunday night and this storm will also travel across the country with more impactful weather coast to coast this week.