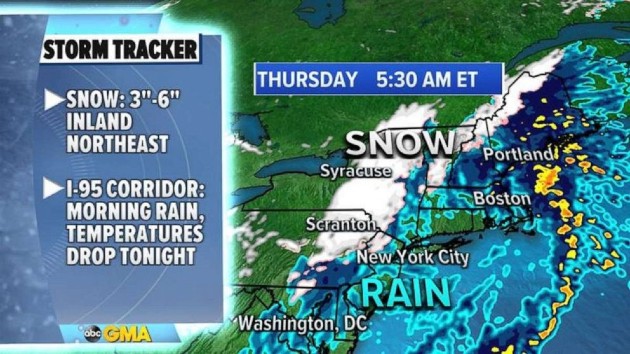 (NEW YORK) — A winter blast is moving through the eastern U.S. Thursday behind a storm system that brought flash flooding and storm damage to the South.

This storm is moving through the Northeast, with cold air mixing in and producing snow from Pennsylvania into New York and New England.

Locally, 3 inches to as much as half a foot of snow are possible Thursday morning and early afternoon from New York into New England.

Behind this storm system, a winter-like air mass is spilling into the central and southern U.S., with freeze alerts issued for two dozen states.

Temperatures Thursday morning are near freezing in Mississippi, Alabama and Georgia.

The coldest air will move into the East Coast and Deep South Thursday night into Friday morning, where nearly four dozen record lows are possible.

In Giles County, Tennessee, three people had to be rescued from flood waters after more than 4 inches of rain fell in just a few hours.

Across the Gulf Coast states, including Alabama, golf ball size hail and damaging winds moved through the area, which produced damage.