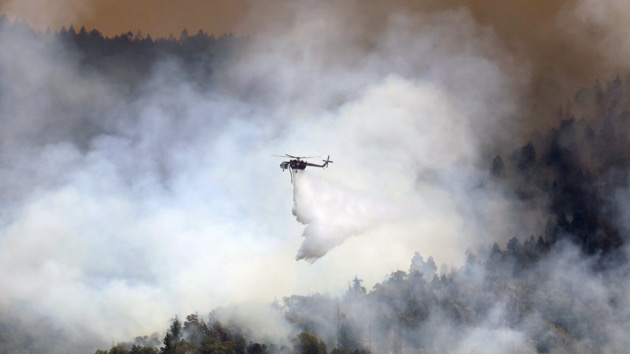 (NEW YORK) — A wildfire inferno is setting up in multiple states as dangerous fire conditions threaten to spread the fires even further.

About 100 miles southwest of Flagstaff, the Crooks Fire in Prescott, Arizona, has blazed through 2,000 acres and is also 0% contained.

Voluntary evacuations have been ordered in Jarales, New Mexico, where the Bosque Fire has burned through 165 acres and is expected to grow, while mandatory evacuations were issued in Boulder County, Colorado, after the Table Mountain Fire grew to 52 acres.

Red flag and high wind alerts had been issued Thursday for eight states from Arizona to Nebraska. Relative humidity is also down to 5%, with wind gusts as high as 70 mph are possible. The wind is being created by a storm system moving through the West on Thursday and Friday.

The worst fire conditions Thursday are expected to stretch from New Mexico to Colorado. A decades-long megadrought in the West has also contributed to the fire danger in the region.

The fire danger is expected to worsen even more on Friday, with states from New Mexico to Colorado classified as being in extreme fire danger, the highest level of fire danger.

The storm system moving West will bring severe weather from Texas to Minnesota, with damaging winds, large hail and the possibility of isolated tornados.