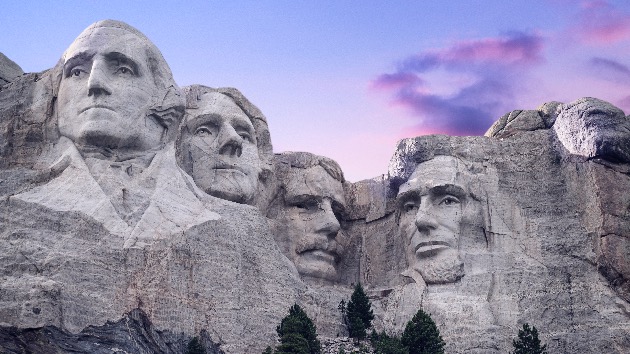 (PENNINGTON COUNTY, S.D.) — Three fires burning in the Midwest are threatening hundreds of homes and have forced the closure of Mount Rushmore Memorial National Park.

The Schroeder Fire, burning in Pennington County, has scorched through nearly 1,900 acres on Monday and remained active overnight, officials said. It is 0% contained.

At least one home and two pole barns in Pennington County have been destroyed by the blaze, authorities said. About 400 homes were evacuated, said Rob Powell, incident commander for the Schroeder Fire.

There were at least 15 structures in and around Mount Rushmore that were threatened, said Travis Mason-Bushman, spokesperson for the U.S. Forest Service. Some of the structures are the homes of park rangers and others are places where tourists visit, Mason-Bushman said.

The 244 Fire, which is moving South, was not directly threatening the monument, Noem said. The fire sparked on private property but the cause is still under investigation, Noem said.

Another fire, the Keystone Fire, was contained to 15 acres on Monday night, according to the latest update on the Great Plains Fire Information website.

The wildfires are occurring outside of the normal fire season, making it difficult for agencies to battle them, State of South Dakota Wildland Fire Division Director Jay Esperance told reporters Monday.

“A lot of the agencies aren’t really geared up for fire season, so it might be a while before we get a lot of those outside resources,” Esperance said.

Critical fire conditions, including gusty winds up to 55 mph, low humidity and dry vegetation, is expected to continue through Tuesday, according to the National Weather Service. Wind gusts clocked up to 70 mph on Monday.