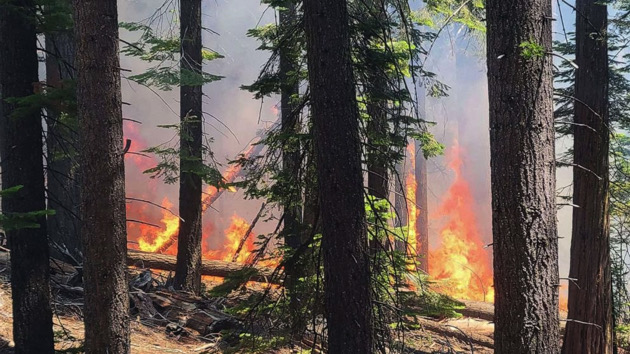 (NEW YORK) — The wildfire that is threatening an iconic grove of sequoia trees in Yosemite National Park could now affect human health hundreds of miles in the opposite direction.

An air quality advisory has been issued for California’s Bay Area, specifically the North Bay and East Bay regions, as the Washburn Fire continues to grow on the southern portion of Yosemite National Park.

The fire, which sparked Thursday near the Washburn Trail in Yosemite’s Mariposa Grove, had expanded to more than 2,700 acres by Monday — inching dangerously close to sequoia trees that have been in the region for thousands of years. More than 2,000 of the acres burned are located in the national park, according to Yosemite Fire and Aviation Management.

In the regions surrounding the San Francisco Bay about 200 miles west of the fire, the Bay Area Air Quality Management District is warning residents of pollutant levels that are expected to be in the moderate range.

Despite the significant smog, air quality is not expected to worsen beyond federal health standards, according to the agency.

The fire is expected to continue “moderately” over the next 12 hours, but fire activity will increase and “actively” spread through the week due to warming temperatures and subsequent drying, according to Yosemite Fire.

The management of the fire is progressing at a relatively slow pace as firefighters set off backfires to clear the fuel that compiled in the region over a large tree mortality event between 2013 and 2015.

Since the fire is slow-moving and not affecting human safety, firefighters are able to take the time to clear the fuel, which consists of both standing trees and dead leaves and brush that have fallen to the ground, fire experts told ABC News.

About 360 firefighters are battling the Washburn Fire, according to Yosemite Fire.

The fuel, however, is posing a significant safety threat to firefighters on the ground, the experts said. The spread may also slow once the fire reaches some of the recent fire scars, according to Yosemite Fire.

The Mariposa Grove, one of the most popular destinations in Yosemite National Park and home to more than 500 mature giant sequoia trees, remains closed, as does the Highway 41 entrance into Yosemite National Park. Sequoias, native to the Sierra Nevada mountain range in California, are adaptive to fire, but intense fire amplified by the dry fuel could kill them, according to experts.

No reports of damage to any of the named trees in the grove have been released, and some tree trunks have been wrapped in fire-resistant foil as protection, a method used in September when the KNP Complex Fire threatened trees in Sequoia National Park’s Giant Forest.

Sprinklers have also been set up around several trees, including the Grizzly Giant, the most famous giant sequoia at Yosemite, which stands at 209 feet. Fire officials hope the steady stream of water, combined with prescribed burns, will be enough to protect the trees from a fatal encounter with the wildfire.

Wildfires sparked by lightning have killed about 20% of the 75,000 large sequoias in the West in recent years, The Associated Press reported. Protections for the Mariposa Grove began as early as 1864, when President Abraham Lincoln signed legislation to conserve the grove, marking the first time the U.S. federal government set aside a natural wonder so that future generations could enjoy it.

That initiative later became the model for the National Park system.