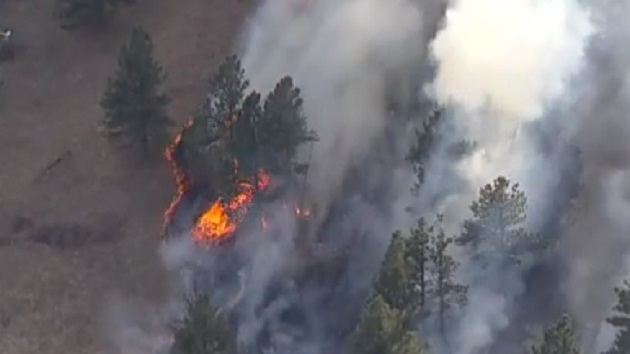 (BOULDER, Colorado) — Diminishing winds on Sunday were helping firefighters battle a wildfire that came close to homes near Boulder, Colorado, and forced the evacuation of about 19,000 people, authorities said.

The blaze, dubbed the NCAR Fire because its proximity to the National Center for Atmospheric Research, ignited Saturday and has burned roughly 200 acres southwest of Boulder, fire officials said.

The fire was initially fueled by thick brush and fanned by strong winds, prompting officials on Saturday to evacuate around 8,000 homes and around 19,000 people. The fire came within 1,000 yards of houses near the west end of Boulder, said Mike Smith, a wildland fire specialist for Boulder Fire Rescue and the incident commander on the NCAR Fire.

On Sunday morning, fire officials said the winds had died down overnight, and firefighters worked to get 21% of the blaze contained. Most of the evacuations were lifted overnight.

Smith said at a news conference Sunday that there was 0% containment on some areas of the fire and air tankers were expected to drop fire retardant on those problem areas.

He also said no homes or structures have been damaged by the fire and no injuries have been reported.

“So, we’re very happy to report that yesterday we had a great day as far as our initial attack when we had over 200 firefighters from over 30 agencies,” Smith said. “That, combined with all of the fuels mitigation treatments that we’ve done in this area, is one of the reasons that we had such great success.”

The cause of the fire remains under investigation.

The fire ignited around 2 p.m. Saturday near the National Center for Atmospheric Research on the southwestern edge of Boulder and forced evacuations in south Boulder and the Eldorado Springs area.

The blaze occurred near the area where a fire ignited on Dec. 30 and burned more than 6,000 acres and destroyed more than 1,000 structures, including 500 homes.

“I think this is just a sign of the way things are going to go,” Smith said. “We continue to work on our planning processes. We continue to work on team building and work with our partners to make sure that we’re as dialed as we can be. We’re feeling good, but we’re a little nervous about the upcoming season.”