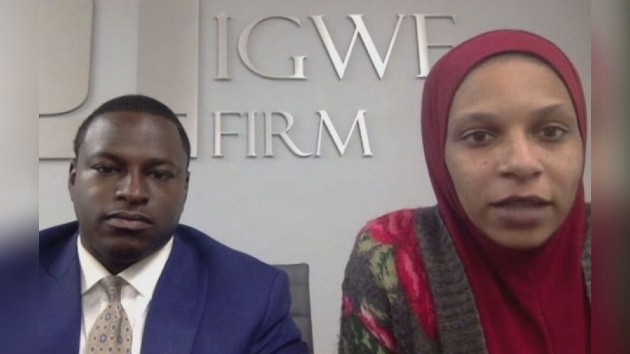 (NEW YORK) — For months now, Amanda Spence has been mourning her husband Lymond Moses, who was killed in a police shooting, while caring for a newborn daughter who will never meet her father.

Spence and her lawyer spoke to ABC News Tuesday night to demand action from the police, and even President Joe Biden.

The incident began in the early hours of Jan. 13 in Wilmington, Delaware, when a New Castle County police officer approached a car where Moses was sleeping. According to police, the officer woke up Moses and the two engaged in a verbal confrontation. Police repeatedly asked Moses to get out of the car.

Police body camera video from the deadly shooting released to the public on Tuesday shows Moses disobeying police commands and driving away and then presumably turning around. The footage then shows Moses appearing to drive forward and in the general direction of the three police officers, but not directly at them. Police say two officers fired their guns and killed Moses.

The three officers have since been placed on administrative leave while the incident is under investigation, according to an attorney for Moses’ family. The New Castle County Police Department said that it cannot draw any conclusions about whether the officers acted within policy and law until all the facts are known and the investigation is complete.

“Our understanding of the incident may change as additional evidence is collected, analyzed and reviewed,” said New Castle County Police Lt. Brian Faulkner, a spokesman for the department.

Spence says the police have changed their story.

The family’s attorney, Emeka Igwe, said police initially reported that Moses was trying to run them over and that “the officers were in imminent danger” but says the video shows this wasn’t the case.

“The video clearly contradicts that,” Igwe said. “Mr. Moses was not attempting to run over these police officers. In fact, he actually veers his vehicle away from them. … They’re clearly not in imminent danger and yet they decided to be the judge, jury and executioner of Mr. Moses, and ended up wrongfully taking his life.”

“They shot as he drove through them and then continued to shoot from the back of the vehicle after his car had already crashed,” said Spence.

Igwe called for the officers to be terminated immediately and said there is “no need for a lengthy investigation. This has been going on since January.”

He said he hopes these officers will be the first in Delaware’s history to be prosecuted and convicted of wrongfully killing a civilian.

Igwe also had a personal plea for Biden, whose hometown is Wilmington, saying he hopes Biden will ensure justice.

“I’m hoping the president will give Ms. Spence a phone call to express his condolences. I’m hoping he will reassure her that justice will be done in this case,” he said. “If the attorney general’s office of Delaware will not prosecute these officers, I’m hoping he will instruct the U.S. Department of Justice to investigate this case as a civil rights violation and prosecute these officers.”

While the family searches for justice, Spence continues to mourn.

“Life without him for these past two months had been a blur,” she said. “He was just extremely genuine and [would help] if you needed it — [if you were] homeless. [If he] didn’t know you, he would do it, and that’s … if you knew the true honest character of him.”