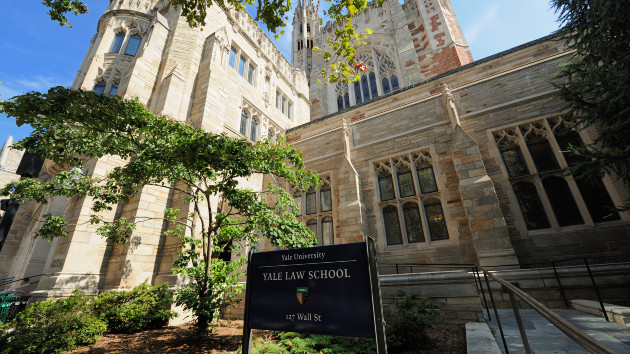 (NEW YORK) — Yale and Harvard universities and the University of California, Berkeley, this week withdrew from U.S. News & World Report’s rankings of the country’s best law schools, with all three institutions citing conflicts between the annual list and their “values.”

All three universities’ law schools are in the top 10 of the ranking. Yale has been No. 1 since the rankings began.

U.S. News maintains that its rankings are of value to students, their primary audience.

“In recent years, we have invested significant energy and capital in important initiatives that make our law school a better place but perversely work to lower our scores,” Yale Law School Dean Heather K. Gerken said in a statement on Wednesday, the day that her school and Harvard announced they would leave the rankings, which require each school to submit information via a survey.

Berkeley said on Thursday that it wouldn’t participate either, following the two Ivy League schools.

The three singled out how the rankings tracked the debt students may take on in a way, they argued, that could incentivize admitting wealthier students.

The schools also took issue with what they said was the rankings’ devaluation of fellowships in public service which weren’t measured comparably to private-sector jobs.

“Although rankings are inevitable and inevitably have some arbitrary features, there are aspects of the US News rankings that are profoundly inconsistent with our values and public mission,” Berkeley Law Dean Erwin Chemerinsky said in a statement.

In an interview with ABC News, Gerken, with Yale, said, “This is a moment in higher education where we are all reflecting on our mission and our relationship to the world, and it’s time to take a step back and think about what we’re doing.”

The schools said in their statements that the rankings contradicted the aim of their institutions despite repeated efforts by the schools to get U.S. News to change its approach.

The “best law school” list undermined the core “commitments” of the schools such as working to remedy inequality, support public interest work and recruit diverse candidates, the deans said.

U.S. News Executive Chairman and CEO Eric Gertler said in response that the rankings were about educating students and, as he put it, holding law schools accountable for the kinds of instruction they provide.

The goal, Gertler said in a statement, was to help students seeking to make “the best decision for their law education” and the recent announcements would not change his company’s mission.

U.S. News “will continue to fulfill our journalistic mission of ensuring that students can rely on the best and most accurate information in making that decision,” he said.

But Gerken, Yale’s law dean, said her school’s decision to drop out of the “flawed” ranking system was “bigger than us [Yale].”

“As the whole country is thinking much more deeply about economic inequality, it’s imperative that universities and law schools do the same,” Gerken said, adding, “This isn’t about Yale Law School. This is about the legal profession and legal education and what we owe to low-income students and what we owe to students who want to go back and serve their communities. Those things matter so much to the profession.”