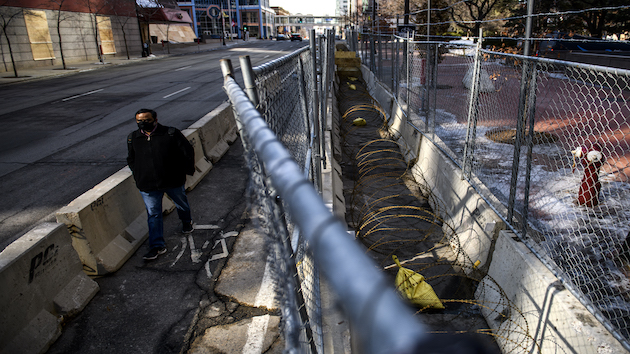 (NEW YORK) — Fortified fencing, barbed wire and concrete barricades have gone up around the courthouse and police stations in Minneapolis in preparation for the landmark murder trial of former police officer Derek Chauvin for the death of George Floyd.

But what may seem like necessary preparations for unrest that could accompany the trial, in a city still recovering from the violence and destruction that erupted there last summer after Floyd’s death, to others is a frustrating sign that government officials don’t understand the source of tensions between police and community in the first place — aggressive police posture.

Kandace Montgomery, a local community activist who helped organize protests over the killing of Floyd, said seeing taxpayer money allocated to ramping up security measures for a police department that she has supported defunding has been unsettling.

“As the people of Minneapolis and Minnesota are calling for justice and healing, and care, state officials have been responding in some ways by basically preparing to go to war with folks,” the 30-year-old Montgomery, director of the non-profit activist group Black Visions Collective, told ABC News. “So, I do think it’s meant to be an intimidation tactic.”

Chauvin’s trial is set to begin on Monday with jury selection, but city officials said they have been preparing for the event for seven months. Minneapolis Police Chief Medaria Arradondo and other state and city government leaders have unveiled a multi-pronged plan to avoid a repeat of the widespread destruction that occurred when violence erupted during protests in the city in the immediate aftermath of Floyd’s May 25 death.

Police conduct and interactions with protesters have been a subject of intense scrutiny for months, since an estimated 15 million to 26 million people took to streets nationwide over the summer to protest Floyd’s death, which was captured in agonizing detail on bystander video. Violence erupted in a number of cities, including Minneapolis, with images of burning buildings, vandalism and looting, overshadowing the overwhelmingly peaceful protests against police brutality.

Minneapolis City Council President Lisa Binder pointed out during a briefing by officials on security planning this week that city leaders haven’t, to her satisfaction, adequately acknowledged during preparations the “pain and suffering” the city has endured over the “horrific way” Floyd died. She alleged that “law enforcement escalated” last summer’s violence and “created the conditions for folks to come from outside our community to cause more harm.”

“I still think too many city leaders, despite all of this, dismiss the work to create a different system of safety as childish or silly, that too many city leaders think that the most grownup response to a problem is always with force and always to begin by sending people with guns, and I just don’t agree,” Binder said. “I don’t think that we can police ourselves out of police violence.”

Arradondo said the plan, called “Operation Safety Net,” will be guided by two core principles during Chauvin’s trial, which is scheduled to last two months: prevention of crime and damage to property, as well as ensuring First Amendment rights for those who wish to peacefully assemble and demonstrate.

Ben Crump, an attorney who represents the Floyd family, noted that despite flashes of violence and destruction in some cities nationwide, the majority of the protests over Floyd’s death were peaceful. A report produced by the U.S. Crisis Project, a joint effort by the Armed Conflict Location & Event Data Project and the Bridging Divides Initiative at Princeton University, showed 95% of 10,600 Black Lives Matter protests that occurred between Floyd’s death and Aug. 22 were peaceful.

Crump described Floyd’s relatives as being “very anxious” about the trial and hopeful that justice will prevail without the occurrence of violence.

“One thing I will say is this is an important case and it is our expectation that (former) officer Derek Chauvin will be convicted for torturing George Floyd to death,” Crump said. “This will be a referendum on whether police are held accountable for killing Black people in America in 2021.”

With some buildings boarded up and others reduced to rubble, Minneapolis government leaders say their city is still recovering from the 5% of the protests that turned violent and that the precautions being taken are justified. City officials told ABC News that an estimate on the cost of damages from the unrest is $250 million to $350 million, based on a property reassessment the City Assessor’s Office conducted this past summer and data on estimated insurance losses from the Minnesota Department of Commerce.

And Minneapolis wasn’t the only city left picking up the pieces. Verisk Property Claims Service — an internationally recognized authority on insured property losses from catastrophes in the United States, Puerto Rico, and the U.S. Virgin Islands — issued a report in November estimating cumulative insured losses from civil unrest in the United States in 2020 topped $2 billion, making it the costliest year for civil unrest losses since PCS record-keeping began.

The second-costliest U.S. civil disorder, according to PCS, was the $775 million in insured losses that occurred from April 29 through May 4, 1992, in Los Angeles after a jury acquitted LAPD officers for using excessive force in the arrest and videotaped beating of Rodney King.

Following Floyd’s death and the release of the video, protests broke out in all 50 states and Washington, D.C., prompting curfews in Minneapolis and at least 80 localities throughout the nation and more than 75,000 National Guard Troops to be activated in 31 states and the District of Columbia. More than 10,000 people were arrested, according to a tally by the Associated Press.

U.S. police departments in several large cities where destructive behavior last summer overshadowed peaceful protests — including Oakland, California, Portland, Oregon, Seattle and New York City — all told ABC News they are closely monitoring the trial and have plans in place in case demonstrations get out of control during the legal proceedings. But like in Minneapolis, officials in those cities said they have received no reports of imminent, credible threats.

“The NYPD is highly experienced in facilitating lawful protests,” Sgt. Jessica McRorie, a spokesperson for the New York Police Department, said in a statement to ABC News. “We will work through our Community Affairs Bureau to liaison with any protest organizers and have officers on-hand to ensure the rights and safety of peaceful protesters and other New Yorkers.”

In addition to securing the perimeters of the Hennepin County Courthouse where the Chauvin trial is taking place and Minneapolis police stations, up to 2,000 National Guard troops, according to Minneapolis Mayor Jacob Frey and other city officials, will be deployed to the city by the time a verdict in the trial is rendered, mostly to escort firefighters and ambulances on emergency calls. Other law enforcement agencies, including state and transit police, as well as the FBI, the federal Bureau of Alcohol, Tobacco, Firearms and Explosives (ATF), and the Minnesota Division of Homeland Security and Emergency Management are providing mutual aid to help keep a lid on tensions.

Arradondo said demonstrations will be allowed to occur “free of intimidation or threats,” but restricted to designated areas near the courthouse.

Besides beefing up patrols around the courthouse and the Hennepin County Government Center, which will be closed for the duration of the trial, the Hennepin County Sheriff Office will provide intelligence gathering by monitoring social media to keep track of what organized groups are doing and to glean information in hopes of heading off violent acts in the works.

“I’m a firm believer that you can never over-communicate in matters such as this that impacts our city,” Arradondo said.

‘Juggling a lot of issues’

Robert Boyce, the retired chief of detectives for the New York Police Department and an ABC News contributor, said communication with the public, especially the peaceful protesters, will be key to success in Minneapolis.

“You want to control as much as you can, which is hard to do in these high-profile cases where so much emotion is going on,” Boyce said. “People want to be there, people want to make their statements, people want to see the press, the press has to be there as well. So, you’re really juggling a lot of issues here and you’re hoping that everybody acts the way they’re supposed to act so everybody can get their message across and the press can do their job.”

The American Civil Liberties Union of Minnesota filed a federal class-action lawsuit in June on behalf of journalists alleging law enforcement officers targeted them with unnecessary force during the demonstrations in Minneapolis over Floyd’s death. The defendants named in the lawsuit — the city of Minneapolis and leaders of the Minnesota Department of Public Safety and the Minnesota State Patrol — responded with a motion to dismiss the suit, arguing qualified immunity protects them from any liability for claims of excessive force.

A spokesperson for ACLU Minnesota told ABC News that the outcome of the lawsuit is still pending with no significant updates at this time.

Asked whether law enforcement can risk going overboard on security, Boyce said, “I think a strong optic is important to know what you can and can’t get away with.”

“Coordination, constant talking, collaboration among the agencies is vital. Understanding that you have to take a look at social media platforms as well as scheduled issues, protests where they’re near and how they can evolve into something worse,” Boyce said.

But Montgomery said that her organization, founded in 2017 to focus on Black liberation, has been mostly left out of the security-prep loop other than receiving information about the city’s plans from community groups they have formed coalitions with.

“But it’s not an including, it’s a heads up, like, ‘Hey, heads-up we’re sending some hyper-militarized equipment to your local neighborhood.’ It’s not asking for folks’ opinions,” said Montgomery, adding that her group plans to support several events being organized by Floyd’s family during the trial.

At least three of the four defendants — Kueng, Lane and Thao — entered not guilty pleas to the charges administratively, their lawyers confirmed to ABC News.

Joseph H. Low IV, a Los Angeles criminal defense and civil trial lawyer, told ABC News, that whether right or wrong, Chauvin represents the face of “the entire legal community” and that the tactics and training of U.S. law enforcement will take center stage at the trial.

“Now clearly there’s an exception to the rule and they would say, ‘that’s not fair, one bad cop doesn’t mean we’re all bad, of course.’ But let’s not be silly and pretend there’s only one bad cop,” Low said.

He said the ramped-up security in Minneapolis could have a chilling effect on the potential jury pool.

“That can cause some fear and some uncertainty,” Low said. “This is not making them feel any calmer. So that will be something that a specialist who picks and selects juries will be aware of.”

Sgt. Betsy Brantner Smith, a spokesperson for the nonprofit National Police Association and a law enforcement trainer for more than 20 years, said Minneapolis officials have little choice but to pull out all the stops in terms of security.

Smith bristled at Chauvin being described as the face of law enforcement or that his trial is somehow a “referendum” on the entire profession, calling such statements “inflammatory.”

“Our justice system, which is still intact in the United States, is based on individual behavior and then treatment of that person as an individual,” Smith said. “There’s no one police officer out there that represents all of us. We are individuals as part of a profession.”