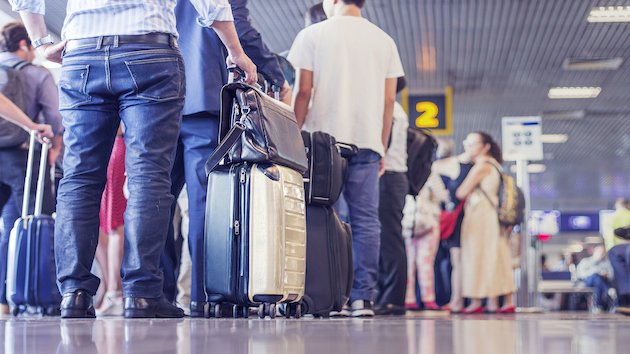 (NEW YORK) — The nation’s airports have been mired by holiday travel chaos, as several major airlines have cancelled or severely delayed thousands of flights nationwide due to dangerous weather conditions, staffing issues and system meltdowns.

Many travelers are left wondering what their rights are during extreme flight delays and cancellations.

On Tuesday afternoon, data from Flight Aware showed that nearly 3,000 flights had been canceled within, into or out of the U.S., while more than 3,500 had been delayed, after a rough Monday for flying.

Southwest Airlines alone canceled at least 70% of its flights Monday and 62% on Tuesday and Wednesday.

What are your rights?

Under federal law, consumers are entitled to a refund if the airline cancels a flight, regardless of the reason, and the consumer chooses not to travel.

Consumers are also entitled to a refund if an airline “made a significant schedule change and/or significantly delays a flight and the consumer chooses not to travel,” according to the Department of Transportation (DOT).

The hang-up — DOT has not defined what constitutes a “significant delay.” According to the agency, whether you are entitled to a refund depends on multiple factors, including the length of the delay, the length of the flight and “your particular circumstances.”

“You do not have to click there and accept that travel voucher, because under federal law you’re entitled to a full cash refund,” Keyes said. “You may have to call the airline and demand to get that cash refund rather than the voucher.”

Keyes also said to contact the party you booked your travel with, whether that be the airline itself or a third-party like a travel agency.

“You have to go through whoever you booked your flight with. And so, if you booked it with a third party with an online travel agency, that’s who you’re going to have to chat with,” Keyes said. “The best practice is actually to book directly with the airline if the price is the same. Because when things go wrong, when they’re delays or cancelations, it’s far simpler.”

What if your flight is oversold and you’re denied boarding?

On occasion, airlines may bump passengers from a trip when the flight is oversold. In cases such as this, airlines must first ask passengers to give up their seats voluntarily in exchange for compensation, according to DOT.

There is no limit on the amount of money or vouchers the airline can offer you, and passengers are free to negotiate.

If there aren’t enough volunteers in these situations, airlines can select passengers and involuntarily bump them off the flight. If you’re one of the unlucky few, the airline is required to compensate you in certain situations — including if the passenger had a confirmed reservation, the passenger checked into their flight on time, arrived to the gate on time, and if the airline cannot get you to your destination within one hour of your flight’s original arrival.

What if you decide to change your flight?

Consumers should know most U.S. carriers did away with change fees during the pandemic — meaning if you decide to change your flight, you’ll only have to pay the difference in fare.