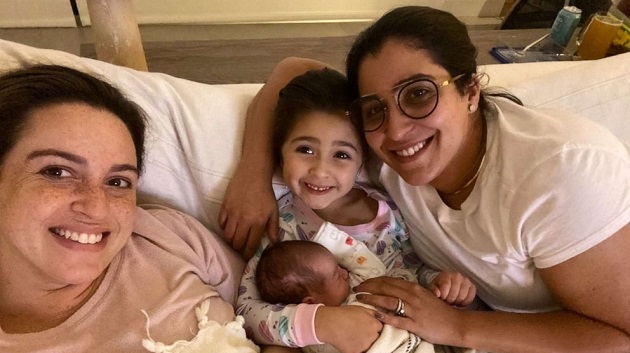 Courtesy of Janelle and Monica Perez

(TALLAHASSEE, Fla.) — Florida Gov. Ron DeSantis signed the controversial “Parental Rights in Education” bill into law this week as expected, but some opponents of the legislation say they were taken aback by the move to sign it so suddenly.

Taking effect July 1, HB 1557 — dubbed by critics as the “Don’t Say Gay” bill — bans classroom instruction on sexual orientation or gender identity for students in kindergarten through third grade or “in a manner that is not age-appropriate or developmentally appropriate for students in accordance with state standards,” according to the text of the bill.

DeSantis signed the bill into law Monday in a ceremony at Classical Preparatory School in Spring Hill, Florida.

“He hid his agenda from the media and the public until the last moment,” Saunders said, adding that the decision to quickly sign the bill at a charter school helped him avoid the student protesters at public schools who had demonstrated in recent weeks against the legislation.

But Bryan Griffin, a deputy press secretary for DeSantis, told ABC News that the bill was signed the same day it was received it from the legislature, “which is not out of the ordinary” for the Governor’s office. He also noted that like public schools, charter schools are also subject to the law.

Will Larkins, president of the Queer Student Union at Winter Park High School in Winter Park, Florida, said he organized one of the many student protests in opposition to the law.

“The issue here is that they’re writing into law, essentially, an outdated and dangerous stereotype that queer people are inherently perverse or sexual,” Larkins said at the press conference.

DeSantis said on Monday that the law is “about protecting parents’ ability to be involved” in their children’s school lives, but not all parents agreed. Janelle Perez, a Miami mother who is running for a seat in the Florida State Senate, has spoken out against it.

“Governor DeSantis spoke a lot about the freedom of parents today. But you know which type of parents he didn’t mention? Me,” she said during the Equality Florida press conference. “LGBTQ parents were not mentioned at all during Governor DeSantis’ speech.”

Critics have raised questions about what the law will mean for LGBTQ+ families.

“What children are they protecting and what parents are they supporting? Because it’s not my child. And it’s not me as a parent,” Perez told ABC News.

Perez said that she was “in the closet” for about 10 years before coming out to her parents the same day that she was diagnosed with stage 4 cancer at 28 years old.

“My parents were conservative and were not accepting of the LGBTQ community or of you know, gay people in general,” she said. “I had to look at cancer and think that I was gonna die to finally find the strength to tell my mom and dad that I’m gay.”

She and her wife, Monica Perez, who were eventually married in Janelle’s parents’ front yard, now have two daughters together, one of whom will start kindergarten next school year.

“We really had to struggle in order to have these girls who we love,” Janelle Perez said.

The couple is now concerned about the future consequences of the law for families like theirs and the environment that it will create for their children.

“When I found out about this bill, it was just, it was a very personal thing for me because I just thought of my daughter’s well being,” Monica Perez said.

Janelle Perez worries that her daughter will not be able to talk about her family in school.

“Teachers will not be able to discuss it openly and freely because they’re going to be afraid of what they say can lead to a lawsuit,” she said. When DeSantis talks about freedom and things like that, it’s definitely not freedom for all Floridians. It’s just freedom for Floridians who agree with him.”

“When our daughter has events in school…how is it going to be for our family?” Monica Perez said. “Is it gonna be okay for both of their moms to attend? Or is that something that she won’t be able to have her parents participate in because it can’t be talked about?”

The couple said it is important for others to see diverse families represented and will continue their efforts in making a more accepting world for their daughters and LGBTQ youth.

“I think that the LGBTQ community has consistently tried to make the life of LGBTQ people who come after them better,” Janelle Perez said. “What I hope will continue to happen now that this bill has become a law, is that people will rise up, people will speak up, families like mine will step further into the light.”

“We know what it’s like to have to fight for this. And this family that we have, we’re incredibly proud of it and nobody is going to silence us. Nobody is going to make us hide,” Janelle Perez said.

“This is going to make us stand out even more,” Monica Perez added.