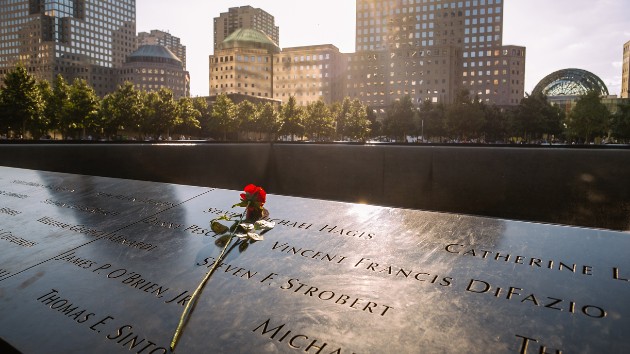 (NEW YORK) — Diana Vizcarra worked a few blocks from the World Trade Center and survived the terror attack of Sept. 11, 2001, without major immediate injuries but things changed in 2014, according to her husband.

A rough cough that would not go away was eventually diagnosed as stage 4 lung cancer, and in 2015, Diana Vizcarra died.

“This was not a normal cancer, the doctors said,” Rolando Vizcarra, a Brooklyn native and now Florida resident told ABC News. “There was no history of family cancer, she was a healthy person, never smoked, no drugs. A doctor later said it was from Ground Zero.”

Vizcarra says the federal government’s World Trade Center Health Program’s Victim Compensation Fund has helped his family with the financial burden of their loss. But advocates say Vizcarra is among just a limited number of civilian family members, as opposed to first responders, who have taken advantage of the program — and the clock is quickly ticking for those eligible to receive aid.

Under the Victim Compensation Fund, families are awarded a maximum of $250,000 if a family member contracts specific cancers linked to the 9/11 attacks and $90,000 for all other claims. If the victim dies from a 9/11-related illness, their family is awarded an additional $250,000 plus $100,000 for the person’s spouse and each dependent.

The Victims Compensation Fund will allow families to receive benefits up until 2090. However, in order to file a claim, eligible applicants must first register with the program by July 29, 2021.

The registration deadline has been pushed back several times to accommodate eligible people, according to Michael Barasch, an attorney who has represented first responders and 9/11 victims and is working to raise awareness.

Barasch said about 80% of the approximately 100,000 first responders who were in downtown Manhattan during 9/11 and the subsequent months have applied for funding. By comparison, only 7% of the nearly 400,000 civilians — including students, residents and workers — who were in the neighborhood during that time and were exposed to the toxic air have applied for the program, according to Barasch.

“This is the secretaries, the janitors, the students and others staff who went back to their offices while the air was still dirty,” he told ABC News. “This program can be life-changing.”

Barasch said more first responders have applied so far because of word of mouth from their comrades who have since died from 9/11 illnesses and because they were more likely to connect their ailments to the attacks.

The attorney said civilians who had family members die from 9/11-related cancers may not realize the attacks were linked to their ailments or may have a misunderstanding that the funds are only for police and firefighters.

Vizcarra said he did not know about the fund until last year.

“I just heard about it through friends,” he said. “I’m grieving so much that I didn’t talk to a lot of people about this until recently.”

Another hindrance to signups, according to Barasch, is the coronavirus. In the past, he and other advocates would raise awareness about the fund at community board meetings, union meetings, events with 9/11 survivors and other opportunities.

“A lot of that outreach was diminished by the lockdown, and we’re running out of time,” Barasch said.

The attorney said even though eligible families have six months until the application deadline, they should act fast. The application involves a lot of paperwork, documentation — including proof one lived or worked in downtown Manhattan between Sept. 11, 2001, and July 31, 2002 — and medical history.

“We’ve gotten a lot of people calling and asking for help to sign up. There’s a lot they have to go through,” he said. “And then once the application is processed, there is a lot more work.”

The 9/11 Victim Compensation Fund awarded nearly $1.6 billion in 2020, according to its annual report published on Feb. 16. The report said 8,273 individuals were found eligible for compensation, which was a nearly 50% increase over 2019.

In the last 10 years of its operation, the fund has paid nearly $7.8 billion to more than 34,000 individuals afflicted by the terror attacks, the report said.

Vizcarra acknowledged that his application process took a lot of work and reopened some emotional wounds, but in the end, it helped his family.

“My advice to everyone who has suffered because of that day: Please apply,” he said. “Having that one less burden has made it easier for us to keep moving.”