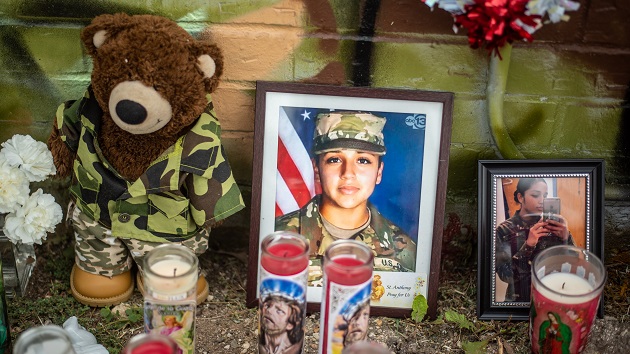 (WASHINGTON) — A long-awaited U.S. Army investigation released Friday has determined that murdered Spc. Vanessa Guillen was sexually harassed by a supervisor, as her family had claimed, and that the leaders in her unit at Fort Hood, Texas, did not take appropriate action after she stepped forward.

Twenty-one soldiers have been reprimanded or disciplined as a result of the investigation that also found that the incidents of harassment were not related to Guillen’s murder and were not carried out by the fellow soldier who is alleged to have murdered her in 2020.

The command investigation, known by the Army regulation 15-6, determined that Guillen was sexually harassed on two occasions by one of her supervisors.

“SPC Guillen was sexually harassed by a supervisor. This supervisor created an intimidating, hostile environment,” the report said. “The unit leadership was informed of the harassment as well as the supervisor’s counterproductive leadership, and failed to take appropriate action.”

“While the investigating officer did find evidence of sexual harassment and mistreatment toward SPC Guillen, after examining all the evidence and witness statements, he determined that those incidents were not related to her murder,” said the report.

Authorities have said Army Spc. Aaron Robinson is believed to have murdered Guillen on April 22, 2020, the day that her disappearance triggered a large search for her on the base. Robinson died by suicide on June 30, as police closed in on him as the main suspect in her disappearance and murder.

The investigation does not provide a potential motive for Guillen’s murder and raises even more questions since it found “no credible evidence to conclude Spc. Robinson sexually harassed Spc. Guillén or that they had any relationship outside of their work setting, only that he had a work relationship with Guillen.”

Investigators determined that Robinson had not sexually harassed Guillen, but that he had harassed another female enlisted soldier the previous year.

Guillen’s family has maintained that she had told them she had been sexually harassed by a supervisor and had tied the incident to her murder.

The allegations led to a reckoning within the military community that led to current and former members of the military to step forward with their own experiences as victims of sexual assault and sexual harassment.

After those comments another supervisor “noticed a marked change in her demeanor, which prompted the supervisor to ask if she was okay,” said the report. “It was then that SPC Guillen reported the incident to her supervisor and another Soldier.”

“Between 16 September 2019 and 9 October 2019, two Soldiers reported this incident to her unit leadership, who failed to initiate an investigation,” said the report.

The investigation determined that the supervisor who had made the comments to Guillen “was unprofessional” and then engaged in “counterproductive behaviors” like targeting her in front of peers to make “an example out of her.”

During a later field training exercise, Guillen felt “uncomfortable” after the supervisor” encountered Guillen while she was engaging in personal hygiene by a wood line.

Last December, the Army fired or suspended 14 officers and enlisted soldiers at Fort Hood, including two generals, following an independent panel’s investigation into the command climate at the base.

Six of those soldiers relieved of duty in December were among the 21soldiers who received administrative punishments as a result of the investigation released on Friday.

On Friday, Army officials said they were not at liberty to disclose the identity or rank of the supervisor who had sexually harassed Guillen.