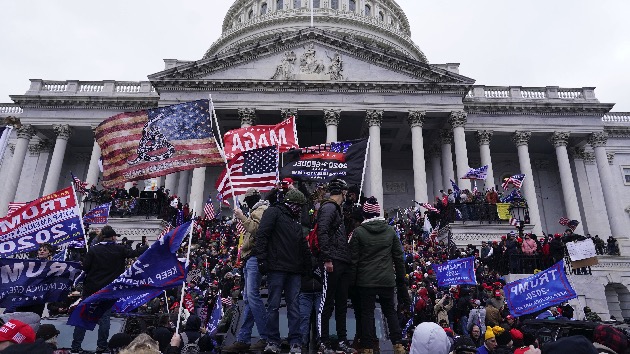 (WASHINGTON) — The Justice Department on Monday alerted several federal judges that an outspoken attorney representing at least 17 alleged rioters charged in connection with the Jan. 6 Capitol insurrection is reportedly hospitalized and possibly incapacitated after testing positive for COVID-19, leaving the bulk of his cases effectively at a “standstill” and his clients “without counsel.”

The California-based attorney, John Pierce, currently represents more defendants charged in the riot than any other defense lawyer — including multiple alleged members of the Proud Boys group and a number of individuals accused of assaulting law enforcement officers.

Pierce, whose firm has previously represented former President Donald Trump’s attorney Rudy Giuliani and Trump’s former campaign adviser George Papadapoulos, had been fundraising for his efforts defending accused rioters through a new organization he set up.

But in a filing made Monday in multiple Jan. 6 cases in which Pierce is involved, the Justice Department said that Pierce has been unresponsive to the government for a week, and that phone numbers for his practice have been disconnected.

In recent weeks, an associate at Pierce’s law firm, Ryan Marshall, has appeared in Pierce’s place during multiple hearings, where he offered conflicting reports about the status of Pierce’s health.

Marshall told a judge during an Aug. 25 hearing that Pierce was on a ventilator suffering from COVID-19 and was nonresponsive, a statement later contradicted by another colleague of Pierce’s who said he was hospitalized but had not contracted COVID-19. The next day Marshall told that same judge that he had not had any direct contact with Pierce, but that one of Pierce’s friends had told him Pierce was sick with COVID-19 while another one said he was not.

With Pierce’s condition unclear, some of his clients have begun to worry. Paul Rae, an alleged Proud Boy from Florida who has pleaded not guilty to multiple counts related to the riot, told ABC News on Monday he was “a bit concerned” about the situation after he learned of the government’s filing from the news. Pierce’s associate, however, subsequently reassured him on Monday evening that Pierce was not on a ventilator and was on the mend, Rae said.

Prosecutors in Monday’s filing took issue with Marshall stepping in for Pierce, noting that Marshall is not a licensed attorney and is currently facing felony criminal fraud charges in a state court in Pennsylvania. Prosecutors told the judge they would no longer be corresponding with Marshall.

Earlier this month, one of Pierce’s clients had removed Pierce from his case. Ryan Samsel, who is charged with assaulting an officer on Jan. 6, directly called the judges’ chambers in July, according to his case docket, to say that he was removing Pierce. A person familiar with the call said Samsel expressed that he had been unable to get in contact with Pierce regarding his case.

Pierce, 49, is a civil litigator from California with a degree from Harvard Law and partnerships at three white-shoe law firms on his resume. He first came to national prominence last summer after signing on to represent Kyle Rittenhouse, the teenager accused of homicide during a violent night of protests following the police shooting of Jacob Blake in Kenosha, Wisconsin.

“[Rittenhouse] did nothing wrong. He defended himself, which is a fundamental right of all Americans given by God and protected by law,” Pierce wrote in an August 2020 press release trumpeting his hiring by the Rittenhouse family. “Kyle now has the best legal representation in the country.”

Although Pierce appeared to have little known criminal trial experience, he helped galvanize public support for Rittenhouse, a high-school senior who quickly became a cause célèbre among conservatives, by heralding Rittenhouse as a modern-day militiaman at the start of a “Second American Revolution against Tyranny.”

“Kyle Rittenhouse will go down in American history alongside that brave unknown patriot who fired ‘The Shot Heard Round the World’ on Lexington Green on April 19, 1775,” Pierce proclaimed last summer in a since-deleted tweet.

Pierce has also espoused conspiratorial views related to the Jan. 6 riot, according to two emails obtained by ABC News. “THIS WHOLE THING WAS A … SET UP,” Pierce wrote in an email that was sent to a Listserv of D.C. lawyers representing Jan. 6 defendants and obtained by ABC News. “AND WE NEED TO WORK TOGETHER TO PROVE IT.”

Pierce boasted to The American Lawyer in 2018 that the firm was “the fastest-growing law firm in the history of the world.”

“We’re looking for Navy Seal, Army Ranger types — really aggressive litigators who want to be on a great platform and litigate great cases,” Pierce told the publication of his efforts to challenge the dominance of the traditional titans of business litigation.

But after three years, nearly all of the firm’s roughly 70 attorneys had left as several lawsuits against Pierce and his firm brought accusations of financial misconduct and debts exceeding $60 million, according to court records.

Over the past two years, at least ten lawsuits have been filed against Pierce and his former firm, according to records from courts in Massachusetts, Texas, Arkansas, California and New York. The plaintiffs included a digital marketing company, legal support vendors, lenders, and a former law partner.

Last year, Pierce signed a “confession of judgment” in a New York court, acknowledging a debt of nearly $4 million to a merchant lender on a high-interest loan against his law firm’s assets and personally guaranteed by Pierce.

Pierce’s early representation of Rittenhouse earned him guest spots on conservative media outlets, which Pierce used to raise money for Rittenhouse’s legal defense and the teen’s $2 million bail. He assailed the charges against his client as a politically motivated rush to judgment.

Last December, after Pierce filed a notice of appearance in Rittenhouse’s criminal case in Wisconsin, Kenosha County prosecutor Thomas Binger took the highly unusual step of advocating against Pierce’s request for admission to the criminal case, a procedural measure required of out-of-state lawyers that would typically be granted without objection.

In his seven-page filing, Binger cited numerous public statements by Pierce that Binger claimed could “materially prejudic[e]” the case, along with reports of the collapse of Pierce’s law firm earlier this year “under a cloud of debt,” and several lawsuits alleging Pierce defaulted on hundreds of thousands of dollars in business and personal loans.

Pierce’s “personal financial difficulties raise significant ethical concerns,” Binger wrote in the filing, contending that Pierce could “personally benefit” from his close ties to the “#FightBack Foundation,” a Texas organization co-founded by Pierce and lawyer Lin Wood. The organization raised money for Rittenhouse’s defense until last fall, when Pierce posted $2 million raised by the foundation to bail the teenager out of jail.

Though Pierce stepped down from the foundation board in September, Binger noted in his court filing that Pierce continued to urge his 32,500 Twitter followers to send donations for Rittenhouse.

“This creates a potential conflict of interest for Attorney Pierce,” Binger alleged in the court filing. “Given his own substantial personal debts, his involvement with an unregulated and opaque ‘slush fund’ provides ample opportunity for self-dealing and fraud. Money that should be held in trust for the defendant may instead be used to repay Attorney Pierce’s numerous creditors.”

In the wake of the opposition from the prosecutor, Pierce withdrew his application to represent Rittenhouse in the criminal case, without responding to the allegations raised in the prosecutor’s filing.

“So that it does not take Kyle’s supporters by surprise, effective immediately I am taking over all civil matters for Kyle including his future defamation claims,” Pierce wrote on Twitter after filing his notice of withdrawal. “I will also be orchestrating all fundraising for defense costs.”

A Wisconsin-based criminal defense attorney, Mark Richards, took over Rittenhouse’s criminal case, which is scheduled for trial in November.

Pierce was ultimately let go in February by Rittenhouse, whose family has since replaced Pierce with Robert Barnes, another California lawyer, to handle possible civil litigation after Rittenhouse’s trial concludes. Prior to joining the case, Barnes had publicly criticized virtually every move Pierce had made, including a failed attempt to challenge Rittenhouse’s extradition from Illinois to face the charges in Wisconsin.

“He created the narrative of this second American Revolution against tyranny, and that the Constitution allows for a 17-year-old to serve in a militia,” Barnes told ABC News. “Those things all seem to be things that came out of Pierce’s head rather than being based on any kind of conversations or consultation with the client. Kyle has nothing to do with militias.”

“Throughout the entire representation, John Pierce’s behavior elevated the interest of John Pierce over his client. And once that became crystal clear that he would just continue to do so, Kyle and his mom made the choice that they made to get rid of him,” Barnes said, adding that Pierce was “utterly unqualified for any role” in Rittenhouse’s defense.

Rittenhouse’s mother, Wendy, told ABC News earlier this year that Pierce seemed fixated on the potential for the family to shop their story and to reap a windfall from civil lawsuits.

Pierce’s termination from the case was made public in a Feb. 4 statement from the family-approved fundraising account, “FreeKyleUSA.” A few hours later, Pierce responded with a summation of his own performance in the high-profile case.

“John Pierce freed Kyle. John Pierce fought with every fiber of his being for Kyle,” he wrote in a tweet. “John Pierce wants nothing but for Kyle to be acquitted and live a healthy, happy life. John Pierce is ferociously loyal to all of his clients, including all former clients. Mission accomplished.”