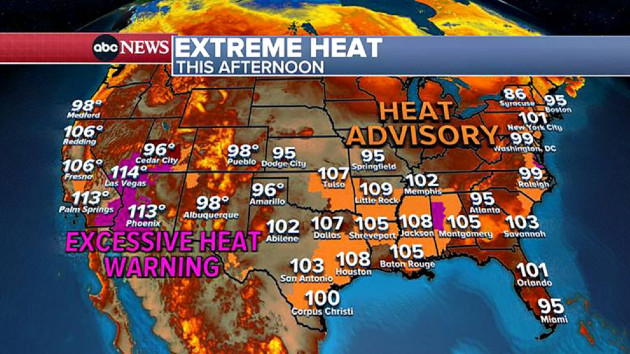 Triple-digit heat is still hitting the West with Thursday temperatures forecast to reach 113 degrees in Palm Springs, California and 114 in Las Vegas. If “Sin City” reaches 114, it’ll break its record high of 113.

In the South, Dallas hit a record high of 109 degrees on Wednesday as Texas’ ongoing heat wave continues to fan spreading wildfires.

The heat is spreading from hard-hit Texas to Arkansas, Mississippi, Alabama, Georgia, Florida and the Carolinas.

The heat is also slamming the Northeast. The heat index — what temperature it feels like with humidity — is expected to skyrocket Thursday to 107 degrees in Philadelphia, 103 in New York City and Washington, D.C., and 101 in Baltimore and Hartford, Connecticut.

The Northeast heat is expected to intensify over the weekend when actual temperatures could approach 100 degrees. Record highs are possible on Sunday from Philadelphia to New York City.

If New York City stays above 90 degrees for seven days in a row, the city will mark its longest heat wave in nine years.

High temperatures are also still inundating Europe, where it’s forecast to hit 103 degrees in Madrid and 99 degrees in Milan.