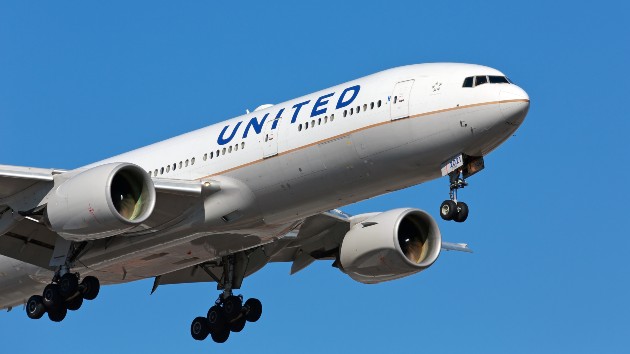 (BROOMFIELD, Colo.) — Eyewitnesses in the air and on the ground said they watched in horror and shock as parts of a United Airlines jet engine exploded and broke apart shortly after takeoff from Denver, raining debris over homes.

Although there were no reported injuries or deaths during Saturday’s incident over Broomfield, Colorado, residents and passengers told ABC News that they are still shaken up.

“It was more along the lines of, ‘Hey, is everything going to be OK?’ That’s not normal,” Brett Guy, who was a passenger aboard United Airlines Flight 328, told ABC News. “I didn’t know what to think.”

The Boeing 777-200’s right engine failed shortly after takeoff on Saturday around 1 p.m. MT for a flight from Denver to Honolulu, according to the Federal Aviation Administration (FAA). Parts of the engine began to strip off as it was engulfed in flames, and debris dropped in midair.

The National Transportation Safety Board (NTSB) said Sunday evening that, based on their initial investigation, the inlet and cowling separated from the engine and two fan blades were fractured.

A portion of one blade was embedded in the containment ring, and some of the fan blades exhibited damage to the tips and leading edges, according to the NTSB.

Guy said he and other passengers heard the noise of the boom and saw the engine come apart from their windows.

“The plane was shaking pretty hard,” he recalled. “It didn’t stop, and nobody really knew. And then, you looked out the window to the side.”

Tyler Thal, a resident of Broomfield, told ABC News he was walking with his family that afternoon when the engine exploded. Thal said they were scared after hearing the explosion and seeing the flash of light. He grew more concerned about the passengers as he saw the jet continue to fly with the engine on fire.

“It’s nothing like anything we’ve ever seen,” Thal told ABC News. “So it was fear for my daughter, my wife, and I [was] just concerned, knowing that that plane is full of people.”

Thal said he was hoping that the jet could make it safely with the remaining engine.

Guy also had a similar thought while he was in his seat on the plane after he remembered a moment from the 1986 Tom Cruise movie Top Gun.

“There’s the part where it’s like, engine one is out. And then he’s like, ‘I’m shutting it down,"” Guy said. “And for some reason, in my head, I was thinking, ‘We’re OK with one engine, but this is kind of messed up."”

The flight returned to Denver International Airport, and all 231 passengers and 10 crew exited without any major injuries, according to the FAA.

The engine debris, however, caused massive damage to homes and streets below. Huge parts of the jet, including the metal coverings, fell on roofs, sidewalks and trees.

Kirby Klements told ABC News he was in his home with his wife when they heard the boom from the explosion. They raced to their front window and saw a giant, circular piece of the engine roll right past them.

“The engine cowling ended up laying right here hanging off of my tree branch,” Klements said. “It had come down and landed square in the bed of my truck at the corner of my garage. It fell over and landed and ended right there with my wife and I sitting right inside here going, ‘What is that?"”

“If somebody would have been in there that had been seriously injured or killed,” he added. “I mean … the whole top of the truck is in the side of the cabin of the truck.”

Klements said he and his wife heard about the flight making a safe landing from the news and that as of Sunday afternoon, the debris was still on his property.

“So that was very fortunate that nobody on the ground got hurt from the several large pieces that hit around the neighborhood,” he said. “And thank goodness that nobody in the plane was injured or anything either.”

Debris remains scattered throughout the town as the FAA and NTSB survey the damage and investigate the incident.

“This will likely mean that some airplanes will be removed from service,” Dickson said in a statement.

Pratt & Whitney said it has “dispatched a team to work with investigators.”

“Pratt & Whitney is actively coordinating with operators and regulators to support the revised inspection interval of the Pratt & Whitney PW4000 engines that power Boeing 777 aircraft,” the company said in a statement Sunday. “Pratt & Whitney will continue to work to ensure the safe operation of the fleet.”

Following Saturday’s incident, Japan’s Ministry of Land, Infrastructure, Transport and Tourism instructed Japan Airlines and All Nippon Airways, both of which operate aircraft equipped with Pratt & Whitney 4000 series engines, to ground all Boeing 777 planes in their fleet. The ministry referred to a “serious incident” that occurred on a Japan Airlines flight on Dec. 4, where the same type of engine was damaged as in the United Airlines incident.

Boeing said it “supports the decision” by Japanese and U.S. regulators to ground its 777 jets equipped with those engines.

“While the NTSB investigation is ongoing, we recommended suspending operations of the 69 in-service and 59 in-storage 777s powered by Pratt & Whitney 4000-112 engines until the FAA identifies the appropriate inspection protocol,” the company said in a statement Sunday. “Boeing supports the decision yesterday by the Japan Civil Aviation Bureau, and the FAA’s action today to suspend operations of 777 aircraft powered by Pratt & Whitney 4000-112 engines. We are working with these regulators as they take actions while these planes are on the ground and further inspections are conducted by Pratt & Whitney.”

Shortly after the FAA issued its directive, United Airlines announced it would temporarily remove 24 Boeing 777 planes equipped with those engines from its schedule.

“Since yesterday, we’ve been in touch with regulators at the NTSB and FAA and will continue to work closely with them to determine any additional steps that are needed to ensure these aircraft meet our rigorous safety standards and can return to service,” the airline said in a statement. “As we swap out aircraft, we expect only a small number of customers to be inconvenienced.”

A person familiar with the situation told ABC News that this particular engine has a unique design. The blade itself is hollow titanium and the source compared it to a chocolate Easter bunny.

Tom Haueter, an ABC News consultant and the former NTSB director of the Office of Aviation Safety, called the engine fan blades “critical” to the investigation.

“What the NTSB wants to look at is, is there any evidence of a preexisting issue with that engine, with that fan blade,” Haueter told ABC News.