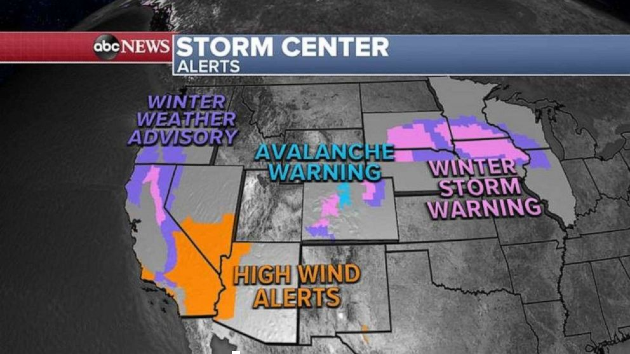 Cheyenne, Wyoming, got nearly 30 inches of snow, making it the biggest snowstorm in the city’s history.

Blizzard warnings were verified in Wyoming and Colorado as winds gusted 30 to 50 mph for several consecutive hours.

On Monday morning, this storm moves east into the Midwest where winter storm warnings have been issued.

Meanwhile, a new storm is moving into the West Coast with heavy snow and strong winds from Oregon to Arizona.

There are 11 states on alert for heavy snow, strong winds and avalanche danger from California to Illinois.

As that weekend snowstorm moves from the Rockies into the Plains and the Midwest, locally 6 to 9 inches of snow is possible from Illinois to Minnesota on Monday.

That second storm will move from California into the Plains and the Gulf Coast by Tuesday and Wednesday with a threat for tornadoes, damaging winds and large hail.

It looks like the worst severe weather day will be Wednesday from Arkansas to Alabama, where strong tornadoes are possible.

Meanwhile, in the East, a large wildfire broke out Sunday due to strong winds and very dry conditions.

A red flag warning continues Monday until 5 p.m. for New Jersey, parts of Pennsylvania and into Delaware and eastern Maryland.

Dry conditions will persist in the Northeast Monday along with very cold temperatures for this time of the year.

Wind chills Monday morning are running below zero in upstate New York and into New England with temperatures in the teens for the I-95 corridor.