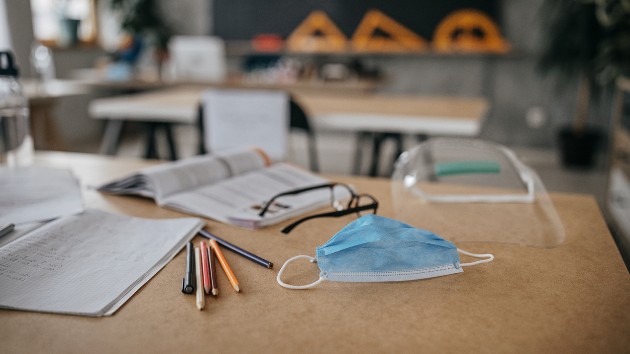 (NEW YORK) — As two school districts that have been largely closed since the start of the coronavirus pandemic plot a return to in-person learning, city and school officials are battling over what that should look like in drawn-out union deals and lawsuits.

Over 70,000 elementary and middle school students in Chicago were expected to return to schools this past Monday for a hybrid model — but they have been fully remote all week as Chicago Public Schools (CPS) and the Chicago Teachers Union (CTU) have yet to reach a deal.

Chicago Mayor Lori Lightfoot expressed frustration Thursday with the ongoing negotiations, which have spanned over 80 meetings, saying during a press briefing that the union has “created chaos that we are now enduring.”

“These schools are open and safe, and we are ready to welcome our students back,” Lightfoot said, noting that the citywide COVID-19 test positivity rate is 5%. “And frankly, they’ve been ready for some time. All we need now is for the CTU leadership to get serious and meet us at the finish line.”

“The ball is in the CTU’s court,” Lightfoot said.

In a press release Thursday, the union charged that the school district was holding up an agreement.

“CPS continues to reject using CDC health metrics, refuses to allow educators with medically vulnerable household members to continue to teach remotely — even though most of the district’s Black and Latinx students will remain remote — and refuses to make improvements in remote learning, despite months of pleas from parents, students and educators,” said the union, which represents more than 25,000 teachers and educational support personnel.

The city is working on a vaccination plan for school staff, the mayor said. According to a document obtained by ABC Chicago station WLS-TV from sources close to the bargaining table, the district agreed to vaccinate 1,500 CTU members a week, though the CTU is asking that that number increase as more doses become available.

Friday is a non-attendance day for public school students, giving the sides more time to negotiate. Both CPS and the CTU are hoping to avert a strike, according to WLS.

In San Francisco, where schools have remained remote since March, the city has resorted to a lawsuit against its own school district in an attempt to reopen classrooms.

City Attorney Dennis Herrera announced he had sued the San Francisco Board of Education and the San Francisco Unified School District (SFUSD) on Wednesday, charging that they have failed to come up with a reopening plan that meets state requirements.

“The Board of Education and the school district have had more than 10 months to roll out a concrete plan to get these kids back in school. So far, they have earned an F,” Herrera said in a statement.

School board members approved a resolution in November that would have started bringing students back on Jan. 25, but the target date was delayed by bargaining with district employee labor organizations.

“The data is clear. Black, Latino, and Asian students, especially low-income students, have lost ground academically compared to white and wealthier students,” San Francisco Mayor London Breed said in a statement. “This is hurting the mental health of our kids and our families. Our teachers have done an incredible job of trying to support our kids through distance learning, but this isn’t working for anyone. And we know we can do this safely.”

The city allowed San Francisco schools to reopen for in-person learning in September. Since then, over 100 private, independent and parochial schools serving nearly 16,000 students have returned to in-person learning.

Herrera said he plans to file a motion on Feb. 11 asking the court to issue an emergency court order to direct the school district, which is governed by the Board of Education, to prepare to offer in-person learning.

“It appears that the city attorney has not read through our plans or joined the hours of open meetings we have had on the topic of safely returning to in-person learning,” Matthews said in a statement. “It is simply untrue that the board and district have no plan to reopen schools. SFUSD has a very comprehensive plan with specific steps around health and safety and what in-person learning will look like for our focal student populations to return as soon as we can complete all the clearly laid out steps.”

Board of Education President Gabriela Lopez charged that the city has not heeded calls to provide schools support for surveillance testing for staff and students — a claim that was echoed by the unions of San Francisco United School District.

“Instead of wasting our time on a lawsuit, the city and mayor could have done what we have been calling for all along, which is to bring all of us together to finalize and implement safety standards and protocols,” the unions said in a statement.

The battles play out as President Joe Biden looks to reopen a majority of K-8 schools in his first 100 days of office.

The administration said it plans to work with states and localities on ensuring schools can open safely by prioritizing teachers’ vaccinations, enabling widespread testing and providing additional guidance for school administrators on things like how to improve ventilation and PPE.